SUNY Distinguished Professor of History Lou Roper has been elected a Fellow of the Royal Historical Society by the society’s Council. 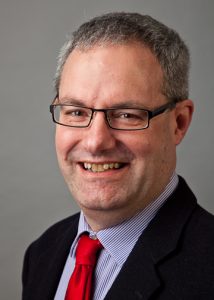 Founded in 1868, the RHS is the chief learned society for the promotion of historical study and of historical professions in the United Kingdom. Election to fellowships recognizes the contribution of nominees to historical scholarship.

Fellows are eligible to vote in Council elections, to seek election to the RHS Council, and to apply for positions on the editorial boards of various publications.

The organization is truly international; Roper joins a class of RHS Fellows from countries including as Australia, Canada, Hong Kong, Ireland, Israel, the Netherlands, South Africa and Spain.

Roper has been renowned for his scholarship in the areas of Early Modern England and Colonial American history since he joined the New Paltz faculty in 1995.

In 2019, he became the 15th faculty member in New Paltz history to be named a SUNY Distinguished Professor, the highest academic rank in the state university system.

Click here for more information on the Department of History at New Paltz.