SUNY New Paltz Facilities Management staff are looking forward to another busy year, as they continue adding and enhancing modern spaces for innovative living, teaching and learning here on campus.

Spring 2018 will include the completion and unveiling of the College’s new solar power battery storage system at Elting Gymnasium, continuing work on the future Engineering Innovation Hub, and a number of renovation and infrastructure projects, made possible through the use of one-time funds and state construction bonds*.

“The entire Facilities Management team has done an incredible job, tirelessly working to meet the needs of our campus and to ensure that our buildings perform properly, efficiently and safely for the students, faculty, staff and visitors who live, learn and work on the New Paltz campus,” said John Shupe, assistant vice president for Facilities Management.

“We also want to thank the numerous public and private partners, including those at the State University Construction Fund and the Dormitory Authority, who help our campus continue to thrive as a living and learning community.”

[*Note: Governor Andrew Cuomo’s Executive Budget proposal calls for a $200 million reduction in capital funding across all state-operated colleges for state fiscal year 2018/19, with a proposed return to the prior level of funding in 2019/20 and for each of the subsequent three fiscal years.]

As we flip the calendar to 2018, here’s an overview of major work recently completed, currently ongoing, or soon to begin at SUNY New Paltz: 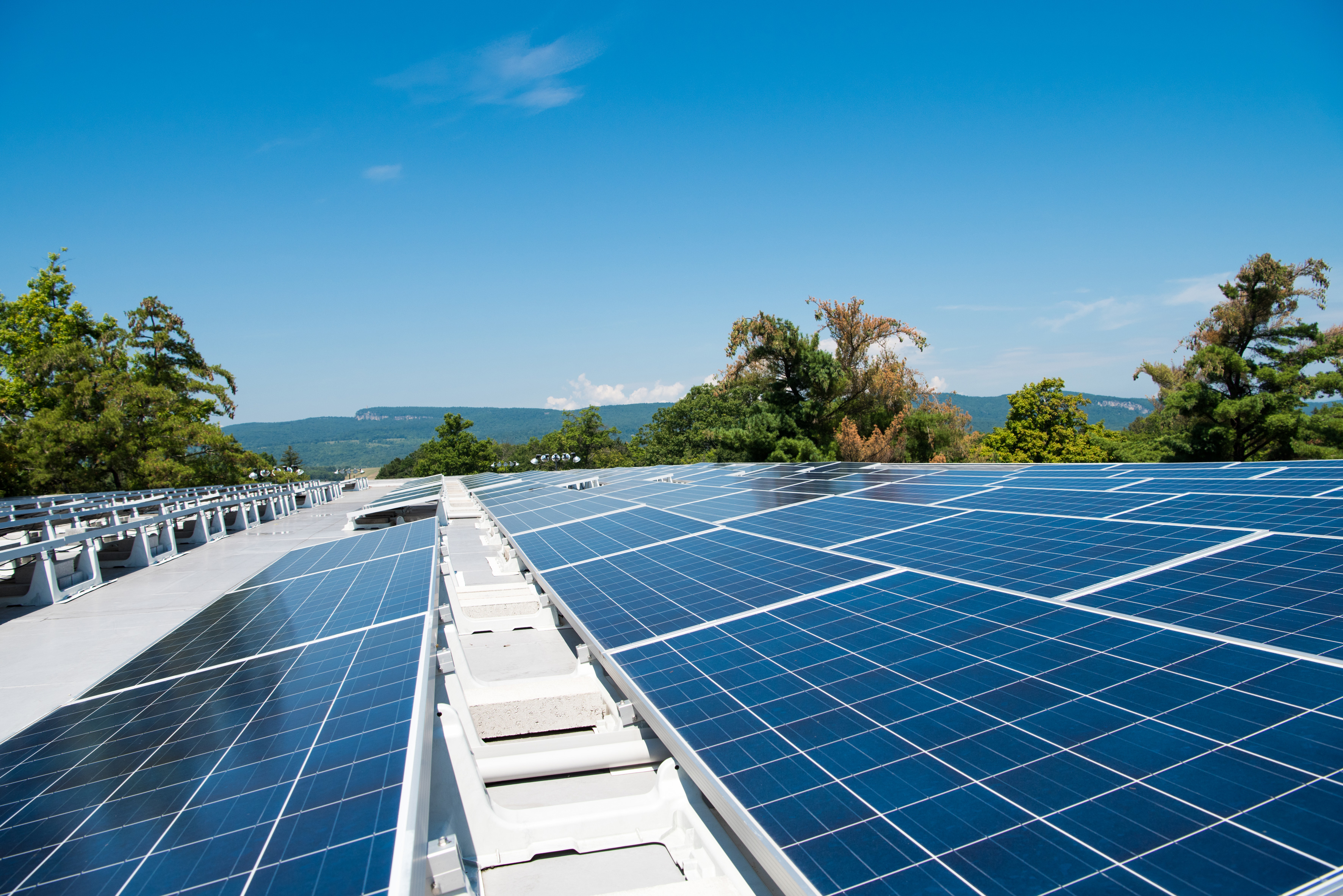 This 217 kilowatt photovoltaic array and battery system will be fully operational by the end of the spring semester, bringing dramatic efficiency benefits to the campus energy grid and supplying an invaluable backup power source for use in emergencies.

The star of the project is the new energy storage system. This state-of-the-art technology unleashes the generative potential of solar panels, making it possible to store large amounts of energy for later use.

Technicians from Solar Liberty worked with Facilities Management staff in November to install the power inverters that make this possible. Testing has been ongoing over Winter Break, and the system is expected to be up and running by February.

Photovoltaic arrays are already operating on the roofs of Elting Gym and Sojourner Truth Library. Even without the storage system, these power sources are already paying dividends for the College; on days when the air conditioning is not needed, the Library can now operate at zero net energy use.

This project is made possible thanks in large part to support from the New York Power Authority (NYPA), New York State Energy Research and Development Authority (NYSERDA), the Electric Power Research Institute (EPRI) and Central Hudson Gas & Electric. Representatives from these and other organizations will help the College unveil the system at an April 2018 ribbon cutting.

The $1.5 million project to expand and renovate the Speech-Language and Hearing Center wrapped up in the fall, and the new space has been getting strong positive feedback from students, faculty and clients alike. 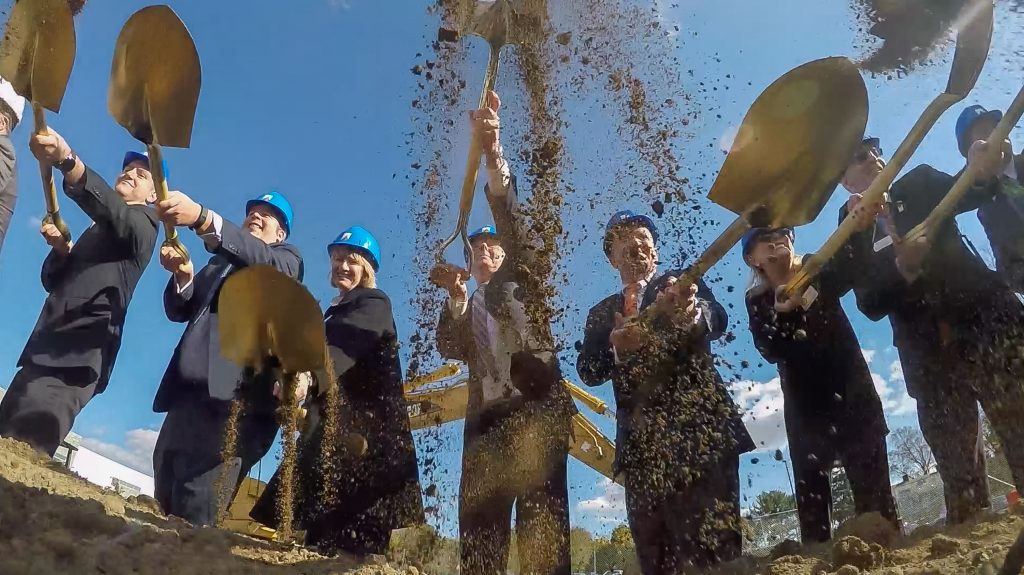 Work will continue on the site of the future Engineering Innovation Hub, which broke ground in October 2017 in anticipation of a 2019 opening. Plans are in place to begin pouring the building foundation as soon as conditions allow it.

Upon completion, this nearly 19,500-square-foot, state-of-the-art facility will help support and diversify the College’s rapidly growing engineering programs and support collaboration between the College and local industry.

The project was made possible by Governor Andrew Cuomo’s NYSUNY 2020 grant competition, in which SUNY New Paltz was awarded $10 million to help improve economic development in New York State. The investment is projected to yield an economic impact of more than $75 million, and 195 jobs, over a 10-year period.

SUNY New Paltz is in the midst of an ongoing series of residence hall renovations, managed by the Dormitory Authority of the State of New York (DASNY) and financed by student housing fees.

The most recent to complete was Bevier Hall, which in 2017 was upgraded for comfort and efficiency and given a new roof. Bevier, like Crispell and Lefevre Halls before it, was renovated from top to bottom in just seven months.

Two residence halls in the Hasbrouck Complex remain to be renovated: Deyo and Dubois. They will be addressed in that order, with work scheduled to begin at Deyo in the summer of 2019.

The Deyo and Dubois projects are expected to take about 15 months apiece, as the plans for those buildings include the construction of a new fourth floor of student residences. This will add nearly 80 beds per hall, a much-needed expansion of residential capacity on campus.

Other upcoming residence hall work will include bathroom renovations in Bouton Hall, a targeted quality of life enhancement for students. 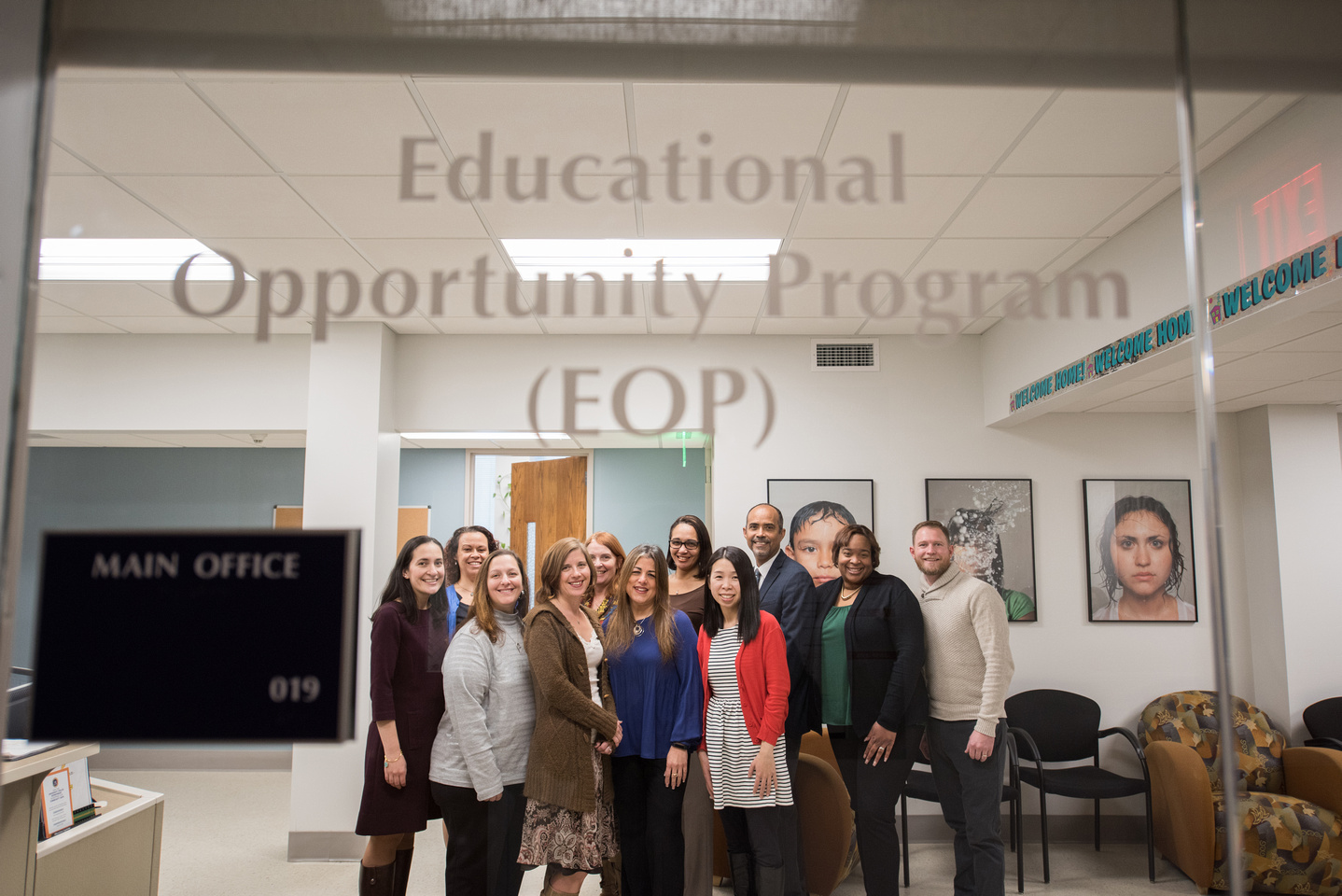 EOP, formerly housed on the fourth floor of the Haggerty Administration Building, moved during Winter Break into their new digs on the ground floor. The newly renovated space is significantly larger and more accessible for students, which will enable EOP to better serve a growing enrollment.

Visitors to campus have likely noticed the scaffolding outside the Fine Arts Building, which was erected in summer 2017 as a protective measure against loose brick on the building exterior. A preliminary study of the problem is complete, and Facilities staff are working on designing a solution to this issue.

Also in design for FAB is a project to replace the building elevator this summer.

Over at Smiley, Facilities staff have undertaken a “mini” renovation of the second floor. The locker room area there will be repurposed to create new studio, classroom and gallery spaces, and a new HVAC system will be installed as well. That work is ongoing and hopefully will be completed in mid-spring.

Then, in summer 2018, staff will re-enter SAB to make additional improvements, replacing the flooring, ceiling and lighting, and painting the hallways.

A project to construct a new parking lot in the nearly-four-acre lot across Rt. 32 on the east side of campus, recently purchased by the College, gets underway in earnest this year.

Facilities staff intend to have the new lot (and its nearly 270 additional parking spaces) open to campus community members by the beginning of the fall 2018 semester.

This upgrade will also see the relocation of the Rt. 32 street crossing, from the current location near the busy Haggerty entrance to a safer area closer to Hopfer House. A new crossing signal will be installed to further ensure pedestrian safety.

The restaurant formerly known as Oscar’s Unplugged is being redesigned as a full service bakery, with construction forecast to complete in spring.

The bakery was designed in consultation with Campus Auxiliary Services, who initiated and funded this project. CAS will move in and start setting up as soon as construction completes, and may be able to open the bakery before the end of the spring 2018 semester.

These small projects may not attract as much attention as a new building or a radical infusion of sustainable energy, but they play a vital role in keeping campus safe, accessible and attractive to members of the New Paltz community.