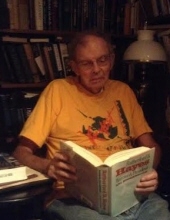 It is with sadness that the College shares the news of the death of Don Roper, longtime professor of history, on Dec. 20, 2020, at the age of 91.

He was predeceased earlier this year by his wife, Carol, whom he married in 1956, and with whom he lived in New Paltz for more than 55 years.

“Don Roper, along with his wife Carol, who passed away last spring, remained a key member of the campus and local communities long after he retired from the faculty,” said President Donald P. Christian. “They will both be missed, and we extend our condolences to their son, Distinguished Professor Lou Roper of the History Department, and other family members.”

A scholar of American legal and constitutional history who received his Ph.D. from Indiana University, Don taught at Keene State College in New Hampshire and The Ohio State University before coming to New Paltz in 1964. He served the College in a full-time role for more than three decades, including a tenure as History Department chair, and retired in 1995. He continued working with students as an adjunct lecturer until 2003.

Lou Roper, one of Don and Carol’s three children, followed in his father’s footsteps and became a history professor at New Paltz. He earned the title of SUNY Distinguished Professor in 2019.

Don Roper served as the Hawks Faculty NCAA Representative for many years in the 1980s and ’90s, and he and Carol became huge fans of the women’s basketball team. The couple could almost always be found sitting in their seats behind the Hawks’ bench for home games.

“Don and Carol, they were fixtures at as many contests they could make,” said former Director of Athletics, Wellness & Recreation Stuart Robinson. “They loved to be supportive of the students and what they were doing athletically. I think for them it was an important connection for the College.”

In a tribute to Carol Roper posted earlier this year, women’s basketball coach Jamie Seward recalled a moment when the team returned the Ropers’ support by attending one of Don’s history lectures.

“We saw that he was doing a speech and we were like, ‘He comes to all of our stuff. We should go to this,’” Seward said. “I think he was really proud that we were there to support him.”

Among Don’s many contributions to the life of the College was his dedicated service to the Lifetime Learning Institute, which offers non-credit courses for adults 55 years and older. He and Carol were also dedicated supporters of the Friends of Sojourner Truth Library and of the music and theatre programs.

No services are planned at this time. Members of our campus community can share a tribute to Don Roper online at the website of Copeland-Hammerl Funeral Home.