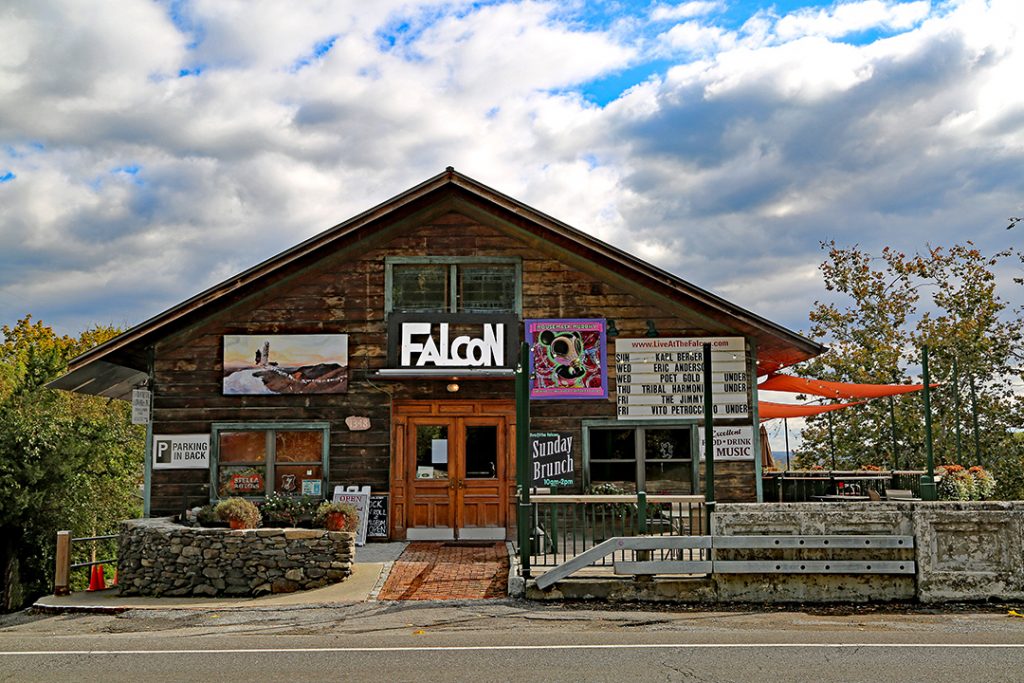 When people think of jazz, they often think of syncopated rhythms that developed from blues and ragtime in New Orleans, Louisiana. Very few conjure images of Marlboro, New York, despite its proximity to New York City. The small, quaint hamlet is better known for its farmland, rolling rural hills and quiet suburban neighborhoods.

But alumnus Tony Falco’s ’83 (Contract Major) commitment to music, the arts and community has challenged this expectation. His career as a thriving, albeit unconventional, businessperson has drawn some of the most well-known names in music to perform in the Hudson Valley at his historic venue, The Falcon.

“I grew up on rock ’n’ roll, but I feel like I’ve nurtured a respectful, eclectic musical audience that I’m really proud of,” said Falco. “I’ve had world-class jazz musicians along with big names in rock, blues, world and roots music at The Falcon.”

The Falcon began as a house concert venue behind the Falco’s family home, but relocated to a 19th century factory building in 2009. It has grown to include a full restaurant, art gallery, The Falcon Underground, a beer garden, tap room, gastropub and is home of the Avalon Archives Museum of Rock & Roll.

Sitting on the tiered patios overlooking Marlboro Falls, visitors to The Falcon can also find evidence of Falco’s time in the Chemistry Department at SUNY New Paltz. Tucked behind the musical archives and beneath the beat of an epic sound system lives Environmental Lab Works, a water analysis laboratory and a tribute to Falco’s chemistry studies at the College in the 1970s.

“I’ve always balanced my artistic side with my scientific side,” said Falco, who is the laboratory’s director and a former adjunct professor at New Paltz. “I know my environmental laboratory seems like an unlikely cohabitant with The Falcon, but I like to use both sides of my brain.”

Falco grew up on Staten Island, New York, one of seven siblings, and arrived at SUNY New Paltz in 1974. He is married to New Paltz alumna Julia (Farrell) Falco ’90g (Education), an educator for the Poughkeepsie City School District. The two have four adult children and have spent their lives fostering a sense of culture and community in the Hudson Valley.

Since its inception as the family’s backyard potluck venue, The Falcon has welcomed all visitors. Falco has a no-tickets-sold, no-cover-charge approach, choosing instead to invite donations for the musicians at the end of each show. The Falcon’s tagline – “No Tickets. No Cover. Donations Encouraged. SUPPORT LIVING ARTISTS!” – is a concept Falco cultivates daily.

“The early Falcon began as a series of pot-luck concert events, with no ticket, food or alcohol sales, at all, just beautiful community spirit that was based on the love of music and love of life,” said Falco. “I wanted this second location to reflect those same ideals. People are often judged on how much money they have. It’s very confidential what goes in the donation box and I think that’s the way it should be. I’m more of a humanist than a capitalist; I don’t want to be that guy.”

Despite his obvious success, Falco is not that guy. He currently employs about 30 full- and part-time people and books an average of 12 bands each week to perform on his two regular stages and one seasonal outdoor stage.

Like the venue, Falco is warm and inviting. After a few minutes of conversation, he’s the guy you want to learn more about; the guy you want to chat with about music and art. His answers will likely prompt you to ask more questions, perhaps about the many other stories that exist beneath the floorboards of The Falcon’s stages.

Luckily for you, if there is one thing Falco wants you to know, it is the one thing you were hoping to hear. At The Falcon, “everyone is welcome.”