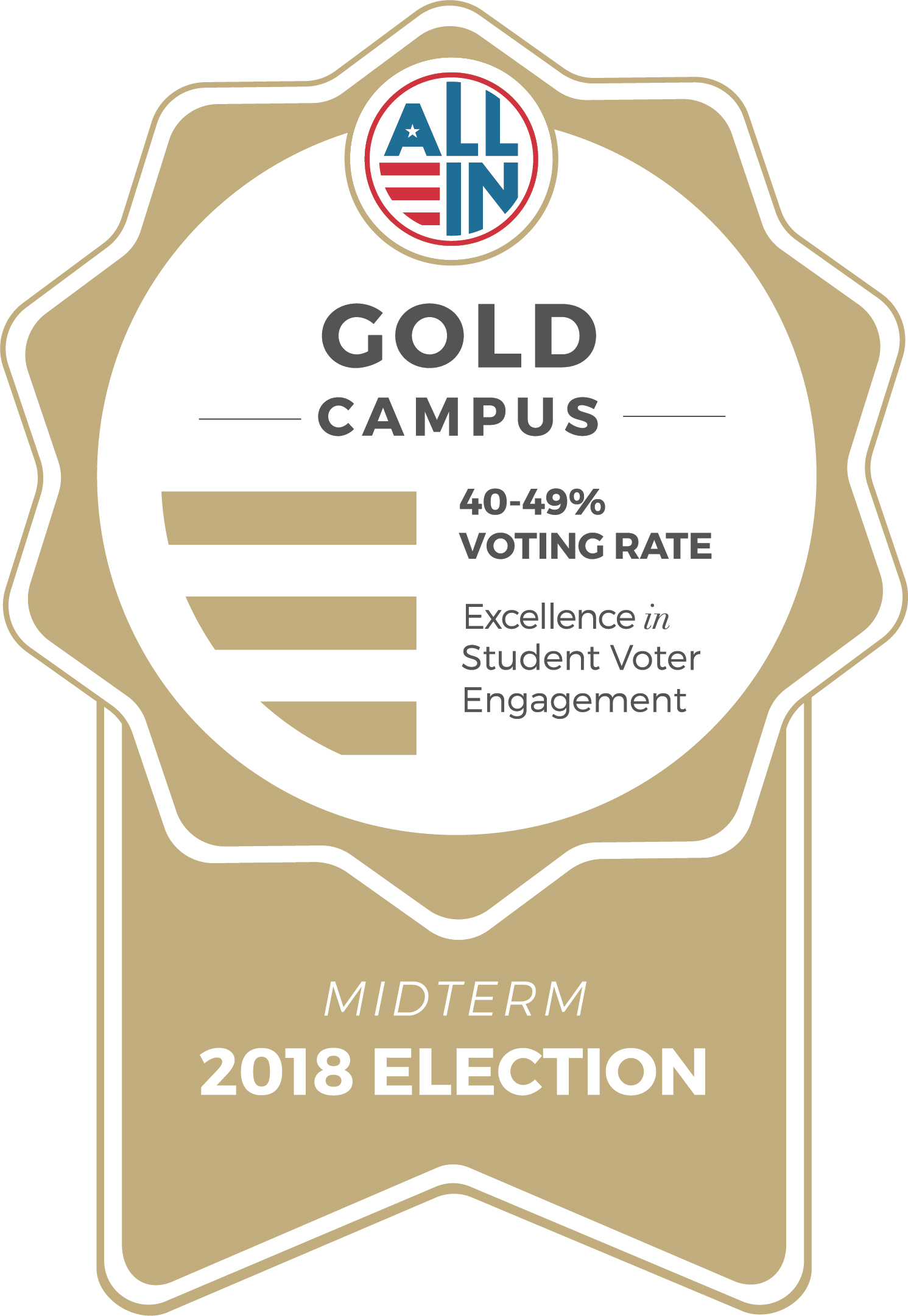 SUNY New Paltz had the highest student voter participation rate in the SUNY system in the 2018 midterm elections, and was the only SUNY institution to receive a Gold Seal award from the ALL IN Campus Democracy Challenge at their award ceremony on Nov. 12 in Washington, D.C.

The ALL IN Gold Seal recognizes campuses that achieved a student voting rate between 40% and 49%. New Paltz student turnout was approximately 45% in 2018, according to a National Study of Learning, Voting, and Engagement (NSLVE) report produced by the Institute for Democracy & Higher Education at Tufts University.

That 45% figure is about six points higher than the national average for college students in 2018, and significantly higher than the 14% of New Paltz students who voted in the 2014 midterms.

The increase mirrored a nationwide jump in college student participation over the same period, as young people across the country turned out to midterm polls in record numbers.

“In 2018, we saw new energy and a greater sense of agency among students that transcends demographic and disciplinary subgroups,” said Nancy Thomas, director of the Institute for Democracy & Higher Education at Tufts University, in the NSLVE report “Democracy Counts 2018: Increased Student and Institutional Engagement.”

There is evidence that the upward trend on our campus is sustaining momentum; in 2019, with primarily local offices on the ballot, more than 270 students voted at campus polling places, up from 179 in 2017.

“We’re seeing more and more students actively volunteering, supporting the candidates of their choosing, and looking for other ways to engage with their country and their democracy,” said Jennifer Turner, chair of the College’s Student Voter and Civic Engagement Committee. “It’s great to see them recognize that even local elections can have a great impact on their lives, and their response is to make sure their voices are heard.”

The Student Voter and Civic Engagement Committee, which includes student, faculty and staff members from across campus, is working to build on this momentum, hosting special events on campus, coordinating information campaigns around voting and voter registration, collaborating with non-partisan, non-profit organizations to conduct voter registration efforts on campus, and supporting on-campus polling activities.

Students in need of information about voter registration and elections can visit the Office of Student Activities and Union Services online or in person in Student Union room 211.

Use this link to see the College’s policies related to political activity on campus.

The ALL IN Campus Democracy Challenge is a nonpartisan, national initiative supporting colleges and universities as they work to increase student voter participation. More than 560 campuses, enrolling more than 6.2 million students, have joined the Challenge since its launch in summer 2016.

The National Study of Learning, Voting, and Engagement provides participating colleges and universities with tailored reports of their students’ voting rates. Launched in 2013, the study now serves more than 1,000 institutions in all 50 states and the District of Columbia.