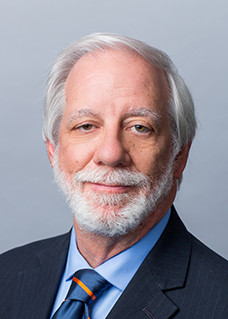 SUNY New Paltz announced today that Bruce Sillner, dean of the Center for International Programs, will enter a phased retirement after a 33-year distinguished career at New Paltz during which he has had a remarkable impact on international education.

Effective Sept. 5, he will serve as Senior Advisor on Global Strategy, focusing on external relations and program development in the U.S. and beyond.

Sillner is currently the longest serving senior international officer in the SUNY system and the first at a SUNY comprehensive institution. He is a true pioneer in the field of international education. He has not only built an award-winning program at New Paltz, but his stellar work reaches beyond our campus, students and staff to SUNY, national, and international levels of excellence.

Sillner began his career at New Paltz in 1986 as the Director of the Haggerty Institute, supervising the intensive English as a Second Language (ESL) program for international students.

He gained admission for the program to the prestigious Consortium of University and College Intensive English Language Programs (UCIEP). He also developed and directed the graduate program in Teaching English to Speakers of Other Languages (TESOL), and in 1990 the New York State Education Department recognized SUNY New Paltz’s TESOL Program as exemplary. Dean Sillner has expanded New Paltz study abroad opportunities from about a dozen programs largely in Western Europe to more than 70 options in 30 countries and on six continents.

As the founding director of the Center for International Programs at New Paltz, Sillner aided in bringing together the Haggerty English Language Program, study abroad, international student and scholar services, the Institute for International Business, and bi-national programs under one administrative structure, the first of its kind on a SUNY comprehensive campus. His visionary leadership has touched the lives of tens of thousands of students. Under his leadership, New Paltz enrolls more international students than any comparable SUNY college and is a leader in the rate of participation of students who study abroad.

In 2015, the Institute of International Education (IIE) awarded SUNY New Paltz the Andrew Heiskell Award for Innovation in International Education, in the “Study Abroad” category. The Heiskell Award recognizes innovative programs in higher education that make study abroad accessible to a broader student population. It is one of the most prestigious honors bestowed on higher learning international programs, with more than 1,400 IIE member campuses eligible each year. IIE recognized SUNY New Paltz for the partnership between the Center for International Programs and the Educational Opportunity Program (EOP), which had expanded the participation of underrepresented students in study abroad by offering advising, tutoring services, and study abroad information sessions to EOP students.

Sillner is the 2009 recipient of the Marita Houlihan Award conferred by NAFSA, the Association of International Educators, for imaginative and creative contributions to international education. In addition, he received the SUNY Chancellor’s Award for Excellence in Professional Service in 2013.

Since 2009, 114 SUNY New Paltz students have received almost $415,000 in highly competitive, federally funded Congressman Benjamin A. Gilman Scholarships, leading all public colleges and universities in New York State. In 2000, Sillner worked closely with US House of Representatives Foreign Relations Committee staff and with international education organizations in crafting the legislation that funds these scholarships and has served as a member of Gilman Scholarship National Review Panel.

Dean Sillner currently serves on the Board of Directors of The Forum on Education Abroad and on the TerraDotta Software Advisory Board. He has been a presidential mentor for the Association of International Education Administrators and a peer reviewer for the American Council on Education Internationalization Laboratory.

In addition, he chaired the SUNY Council on International Education, co-chaired both the SUNY and the World implementation team and the New York State Task Force on Study Abroad Safety and served as president of the non-profit organization, SUNY France.

He has been a strong advocate for collaboration between US and Cuban universities and represented SUNY New Paltz in the first delegation of 12 American universities selected to rebuild academic ties with Cuba. He laid the foundation for the recently inaugurated dual degree program in Early Childhood Education, the first collaboration of its kind between a US and a Chinese university.