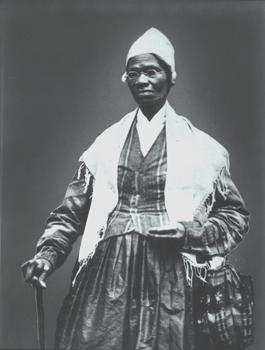 The Sojourner Truth Library at SUNY New Paltz announces a new celebration of the life and legacy of its namesake, Sojourner Truth, the abolitionist and women’s rights activist with deep ties to the history of Ulster County.

The Library will observe Sojourner Truth Day on March 6, with a panel discussion titled “The Truth about Sojourner and Slavery in Ulster County.” The event will be held from 4:30 – 6:00 p.m. in the Coykendall Science Building Auditorium, and is free and open to the public.

This timely conversation will be moderated by Mark Colvson, dean of the Sojourner Truth Library, and will feature experts in Hudson Valley history, and African-American histories in particular.

The panel discussion works in tandem with a separate exhibit, on view at the Sojourner Truth Library Lobby from Feb. 27 – March 19, titled “Somebody’s Calling My Name: Free & Half Free.”

The exhibit is a chronology of people of African descent in the Hudson Valley, beginning from their earliest arrivals in the 17th century.

It follows the narrative of 11 men who, in 1625, became the first African descended people to arrive in the Hudson Valley (the first women arrived a few years later). They were originally enslaved, but in 1644 they petitioned for and won their freedom. While no longer slaves, they remained beholden to the Dutch West India Company, required to surrender the fruits of their labor and denied equal status to the white Dutch members of the newly-settled community.

“Somebody’s Calling My Name” is a traveling exhibition developed with support from the New York Council for the Humanities and the New York State council on the Arts. It was originally created for the quadricentennial of the City of Kingston, and was curated by Greer Smith, who will share her reflections on the exhibition during the March 6 panel.

Use this link to learn more about the Sojourner Truth Library at SUNY New Paltz.