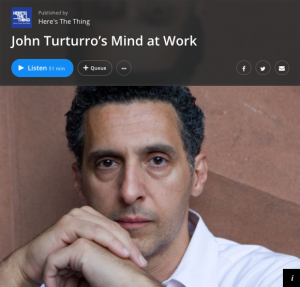 Award-winning actor, director and writer John Turturro ’79 (Theatre Arts) shared his feelings of appreciation and gratitude toward the SUNY New Paltz Theatre Program and its beloved faculty in a recent interview for Alec Baldwin’s podcast, “Here’s The Thing.”

“I had a few teachers who took me under their wing and had a major influence on my life,” said Turturro during the nearly hour-long segment produced by WNYC Studios.

When asked by Baldwin to name just one, Turturro did not hesitate.

“Beverly Brumm,” he answered. “She taught me how to break down a script, play an objective, how to work physically. She spent so much time with me out of the classroom too. I had a bunch of teachers who cared about me and the other students.”

Raised by Italian working-class parents in Brooklyn, Turturro won a scholarship to the Yale School of Drama after graduating from New Paltz with his bachelor’s degree. He later rose to fame after starring in Spike Lee’s “Do the Right Thing” and has portrayed a wide range of characters in more than 40 theatre and film roles. In 2016, he was nominated for a Golden Globe Award and Screen Actors Guild Award for his performance on HBO’s miniseries “The Night Of.”

Turturro is one of many well-known guests featured on “Here’s The Thing,” including Patti Smith, Questlove, Sandra Bernhard and Molly Ringwald.

“Here’s The Thing” is a series of conversations with artists, policy makers and performers hosted by Alec Baldwin. Each segment focuses on their personal stories, from what decisions changed their careers to what relationships most influenced their work.

To listen to the rest of Turturro’s intimate and honest conversation with Baldwin, visit http://www.wnyc.org/story/john-turturro.