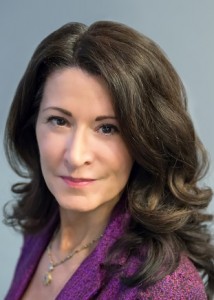 Regina Calcaterra ’88 (Political Science), an attorney, advocate and best-selling author of the memoir “Etched in Sand,” will deliver the Undergraduate Commencement address on Sunday, May 15, on the Old Main Quadrangle on the New Paltz campus. The ceremony begins at 10 a.m.

Calcaterra has participated in numerous College events, most recently as Distinguished Speaker (Spring 2015) and as a panelist for a Women’s Summit in April 2015. She joined the SUNY New Paltz Foundation Board in January of this year.

Her memoir, about how she and her siblings survived growing up homeless on Long Island, rose to #2 on The New York Times Best Sellers list and remained on the list for 17 weeks. As a result of its messages of resiliency and optimism, it has been integrated into middle, high school and college curricula throughout the United States. Her second non-fiction book, “Girl Unbroken,” will be published by HarperCollins Publishing in October 2016.

Calcaterra presently works as counsel for a private law firm. During her 28-year career, Calcaterra has not lost sight of the importance of reaching out to young people in need – especially those deprived of stable homes and families. She proudly serves as board member of You Gotta Believe, a not-for-profit organization whose mission is to find permanent parents and families for young adults, teens and pre-teens adrift in the foster care system.

Education has always played an important role in Calcaterra’s life. As a child in and out of foster care, she was often told that the only way out of her situation was to be part of the less than two percent of foster care children who graduate from college. Because of this, she enrolled at SUNY New Paltz where a class on International Politics taught by Professor Lew Brownstein (now retired) inspired her to seek a career in public policy and the law.

“This is a way to come back to a community that significantly impacted the direction of my life,” she said.

“Regina is a proud and engaged alumna with her alma mater, and we are thrilled that she will deliver this year’s Undergraduate Commencement address,” said SUNY New Paltz President Donald P. Christian.

“This is a special day for our students and their families. The depth and breadth of Regina’s professional and deeply moving personal life experiences are inspiring, and she is a wonderful example of what our graduates can achieve in life and livelihood with a New Paltz degree and education. We look forward to her role celebrating the class of 2016.”

“SUNY New Paltz kept the light burning on my journey out of foster care by showing me the path forward – a light that could have easily dimmed elsewhere,” said Calcaterra.

“It provided me opportunities I never knew existed. And those moving on from New Paltz this year will have more options and opportunities ahead than any class before them. I’m honored to have this one chance to speak to the 2016 graduates to remind them how truly prepared they are as they embark on their next journey.”

Calcaterra began her public service career working for the Eastern Paralyzed Veterans Association advocating for the rights of individuals with disabilities, specifically veterans. Thereafter, she joined NJ Transit where she worked toward ensuring that its commuter and light rail, bus and paratransit systems complied with the newly enacted Americans with Disabilities Act of 1990. At this time, she also began earning a law degree through the evening program at Seton Hall University School of Law. She was then appointed director of intergovernmental relations for the New York City Comptroller, where she successfully secured the passage of 10 state laws, including laws that allowed more flexibility for investing in the state and city’s pension and treasury funds. Calcaterra later served as deputy counsel to the New York City Employees’ Retirement System and a partner in a securities litigation firm representing large investors who were defrauded as a resolute of corporate fraud. She also worked as legal counsel for a New York State agency.

She recently served as executive director for two New York State commissions. The first was charged with investigating the state’s utility companies’ preparation and response to recent significant weather events. Under her guidance, this commission put forth two reports that included recommendations for statutory and regulatory changes related to the utility industry of which more than 90 percent were adopted. The second commission was charged with investigating public corruption and resulted in the adoption of state laws that strengthened enforcement mechanisms against public corruption.

Prior to her state appointments, Calcaterra was chief deputy to the Suffolk County Executive where she managed a county of more than 1.6 million residents, a $2.7 billion annual budget and a 9,500-employee workforce. During her tenure, she managed the county’s fiscal crisis and oversaw the county’s day-to-day operations and its immediate Superstorm Sandy response and recovery.