This invitation was originally sent to faculty and staff via email on Nov. 21. 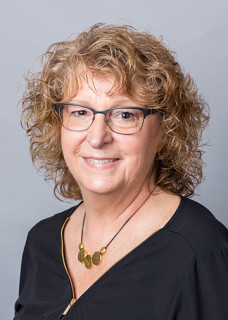 Please save the date, next Wednesday, Nov. 30 from 2:30 p.m. – 4 p.m. for a retirement reception in the HAB lobby to thank Jean Vizvary ’91g (Humanistic/Multicultural Education), Director of the Disability Resource Center, for her service to New Paltz.

For those of you who are not aware, Vizvary is an alumna, and her retirement at the end of December reflects a total of 40 years of service in higher education.

Vizvary began her career at SUNY Ulster and held a variety of positions in such offices as Financial Aid, Advising and TRiO/Student Support Services and Disability Services during her 25-year tenure there. From there she worked at Marist College for eight years as the Director of Special Services/ Disability Services, and the TRiO/Student Support Services Program. Vizvary also worked at Mount Saint Mary College for one year in Disability Services. When the opportunity to apply for a position at SUNY New Paltz presented itself, she was thrilled at the thought of returning to SUNY.

Vizvary has been at New Paltz as the Director of the Disability Resource Center for the past six years.  She noted that she started in the DRC when there were only three small testing rooms that only held two or three students and her staff had to schedule tests in rooms all over campus.  The DRC quickly outgrew that space and has been housed in HAB 205 for the past four years where there are a variety of space configurations and computers for students. During the years Vizvary has been director, the campus has gone from serving 450 students to nearly 700 students. She has helped support the implementation of the Kressner Family Autism Spectrum Program Fund, and an Art Therapy room which is now in its second year.

Over the years she has been on many committees including the Digital Accessibility Committee, which has made a huge and very positive impact on the campus under the direction of Kate Bohan.  Vizvary also served on the Academic Standing Committee, Personal Safety Committee, Housing Accommodations Committee, and the Diversity and Inclusion Council. For the past four years, she has been on the Executive Committee of the New York State Disability Services Council and a member of the Conference Planning Committee. She has been a great mentor and supervisor, brining a wealth of knowledge and applied experience that will be hard to replace.

Her plans for retirement are simple – she looks forward to spending time a lot more time with her family, children and grandchildren. Stop by for a piece of ‘send-off’ cake between 2:30 p.m. – 4 p.m. A few words will spoken about Vizvary at 3 p.m.