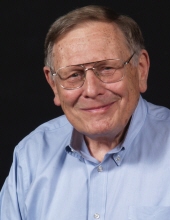 It is with sadness that the College shares the news of the death of Thomas Nyquist, a former SUNY New Paltz faculty member and one of the longest-serving mayors in Village of New Paltz history, on Dec. 2. He was 88.

Nyquist was born in Montana in 1931. He served in the Army during the Korean War and later began a career as a student of political science and international relations, earning his Ph.D. in African Studies from Northwestern University.

Nyquist and his wife, Corinne, came to New Paltz in 1968. Corinne began what would become a decades-long career at the Sojourner Truth Library, and Thomas assumed a faculty role teaching African Studies. He later transitioned to a position as an administrator in grants development at SUNY Central.

After years of engagement in local government on planning boards and in the Ulster County Legislature, Nyquist was elected Village of New Paltz mayor in 1987. He served four consecutive terms through 2003. Among his many achievements were the development and expansion of many of the parks and public walkways that continue to define the character of the Village.

The Nyquist family created the Tom and Corinne Nyquist Foundation in 2004 to provide small grants to grassroots initiatives and nonprofit programs in New Paltz and the Montana region of his birth.

A recent New Paltz Times article described the mission of the Foundation: “They’re particularly interested in supporting projects where a small amount of money may make the difference between success or failure, with most of the grants ranging from $100 to $1,000.”

Among the Nyquist Foundation’s most significant contributions to New Paltz was its purchase of a 56-acre plot of land just off Huguenot Street. Now renamed the Nyquist-Harcourt Wildlife Sanctuary, the space is home to more than 140 species of birds, and offers hiking trails leading to gorgeous views of Wallkill River wetlands beneath the Shawangunk Mountain range.

Thomas Nyquist is survived by Corinne, his son Jonathan and daughter Lynn, and many loving grandchildren. Use this link to view an expanded obituary.

In lieu of flowers, donations may be made to the Nyquist Foundation, the Nyquist-Harcourt Wildlife Sanctuary, Historic Huguenot Street or the Wallkill Valley Land Trust.