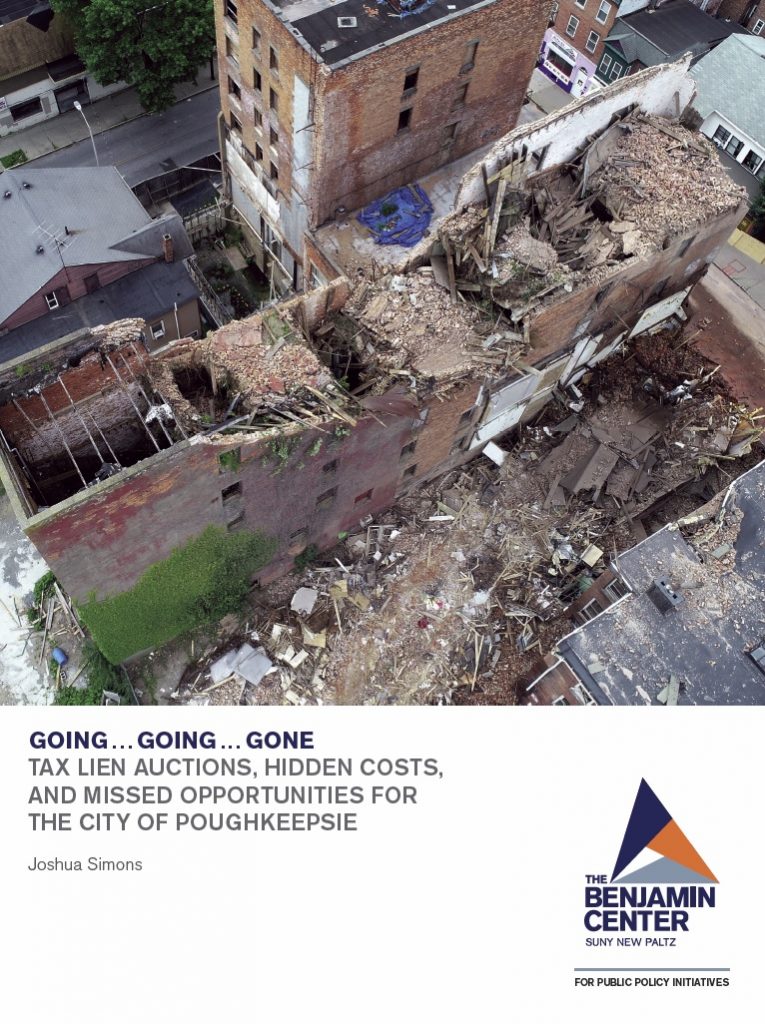 The brief examines the differences between the conventional in rem procedure for tax foreclosure and the tax lien auction system utilized by Poughkeepsie, and demonstrates multiple negative impacts of the tax lien system. It also offers recommendations for more equitable tax collection models that will bring in more revenue and allow for policy interventions that could help to revitalize the city’s vacant and abandoned properties.

Poughkeepsie differs from most of the local governments in New York State, and every other government in Dutchess County, in that rather than using a tax foreclosure system to collect delinquent taxes, it uses a tax lien sale system, wherein private investors can buy the tax debt in the form of a lien on the property and charge interest on the debt.

Property owners have two years to remit the tax debt (plus interest and fees) to private lienholders. If they are unable to do so, the property is transferred to the person or company that bought the lien, even though the value of the property nearly always exceeds the amount owed. This system is unique to Poughkeepsie even among other New York municipalities that use tax lien sales, most of which require the purchaser of the lien to petition for tax foreclosure after two years.

Simons’ study finds that from 2007 to 2017, 208 properties were transferred to the purchaser of tax liens – 80 percent of which were zoned residential, mostly multi-family or apartment buildings.

The brief presents evidence that this practice is disproportionately affecting the city’s communities of color, and its poor, aged and infirm residents. It finds that 72 percent of the owner-occupied properties that have been transferred are located in minority-majority census blocks. By comparison, only 35 percent of the census blocks in the city are minority-majority.

At the same time, the practice has been extremely profitable for private investors. Tax lien purchasers are entitled to 12 percent interest annually, and if after two years they take ownership of the properties, they make even more money selling them off.

Properties whose liens had been purchased for a total of $581,192, and were transferred after two years when the debt was not payed off after two years, were subsequently sold for $7,767,102 – a 1336 percent return on investment for lienholders. The profit margins are even higher for owner occupied properties.

Simons recommends three solutions to make Poughkeepsie’s delinquent tax collection system more effective and fair, and lays out the pros and cons of each. The first would be to shift the responsibility to the County; the second would be to modify the existing system through the work of Mayor Rolison’s Anti-Blight task force; and the third would adopt the in rem process locally, thereby making the city eligible to receive state funding for land banking.

The brief acknowledges that city officials may be concerned about short-term cash flow problems arising from a switch to in rem tax collection, and offers solutions to mitigate those effects, but it also urges quick action on this issue.

“This work is a prime example of the kind of focused inquiry done by the Benjamin Center: rigorous and evidence based, supporting practical policy proposals that will improve local governance,” said Benjamin Center Director Gerald Benjamin.

Use this link to view and download “Going … Going … Gone: Tax Lien Auctions, Hidden Costs, and Missed Opportunities for the City of Poughkeepsie” in its entirety.