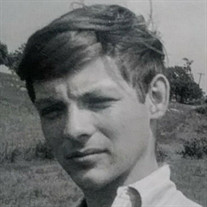 It is with sadness that SUNY New Paltz shares the news of the passing of Kenneth A. Burge, Jr., 86, on Nov. 14.

Burge was a beloved art professor who taught at the College from 1965 until his retirement in 2000. He was a painter and natural educator whose legacy includes major contributions to the founding and early operations of the Women’s Studio Workshop in Rosendale, N.Y.

Burge was also a U.S. Army veteran who served from 1955-1956. He was politically conscious and active as a member of multiple non-profit advocacy organizations and a participant in protests across the country.

A Graveside Service for the burial of his cremains will be held at 1 p.m. on Friday, Dec. 1, 2017 at the Ulster County Veteran’s Cemetery, 81 Plains Road, New Paltz, N.Y., with full military honors.

Condolences may be made to the family at www.copelandfhnp.com.