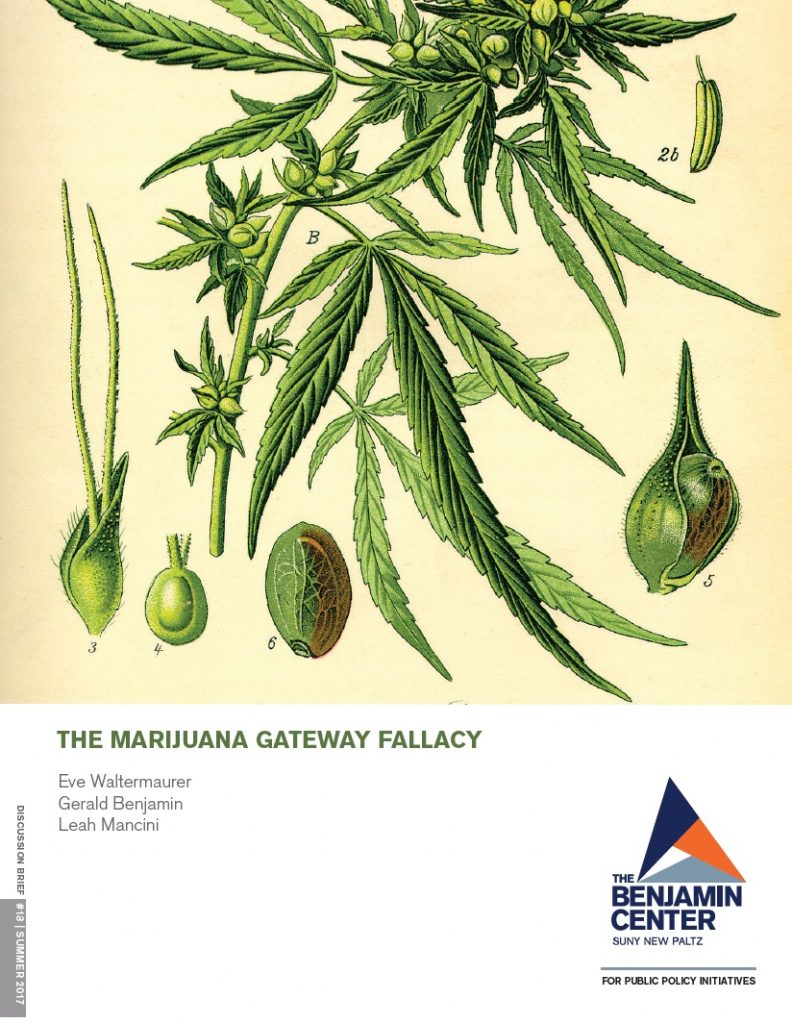 The Benjamin Center for Public Policy Initiatives at SUNY New Paltz has released its 18th discussion brief, “The Marijuana Gateway Fallacy.” The brief marshals extensive social science evidence to show that the idea that marijuana use is a “gateway” to the use of harder drugs is a myth.

The report was written by a multi-disciplinary team consisting of Eve Waltermaurer, an epidemiologist; Leah Mancini ’17 (Psychology), a Benjamin Center student researcher and recent New Paltz alumna; and Gerald Benjamin, a political scientist.

They find that the gateway drug theory was advanced and persists in policy discourse for political purposes, despite the great and increasing weight of contrary scientific evidence.

They also argue that the gateway myth has done more social harm than marijuana use itself, because it has been used to support drug policies that have diverted attention and resources from the burgeoning opioid crisis.

“Maintaining this myth not only wastes resources but actually harms numerous individuals, primarily members of minority groups, who are being criminalized,” Waltermaurer said. “Energy which could be better applied toward reducing the truly harmful opioid epidemic, is instead spent on a fool’s errand.”

This latest Benjamin Center brief offers an important research-based perspective to an issue that raises passions on both sides of the political aisle.

In recent years, support for legalization of marijuana has become a majority sentiment in many jurisdictions, a trend largely driven by younger voters. A number of significant decriminalization bills have been passed, and as of November 2016, medical marijuana had been legalized in 28 states and Washington, D.C.

New York joined states permitting the use of marijuana for medicinal purposes in July 2014, when the Compassionate Care Act was signed into law. This Act allows healthcare providers to prescribe medical marijuana under specific controlled circumstances, and set up a framework for practitioner registration, patient certification and patient caregiver registration.

The cause of further decriminalization of recreational use in New York, however, has not yet achieved its goal, despite its popularity with the public. Many Republican legislators have opposed extending legalization. Among Democrats there is also uncertainty as to how federal law enforcement officials will treat recreational sale and use, still outlawed at the national level, under the administration of President Trump.

The full text of “The Marijuana Gateway Fallacy” can be accessed online by following this link.

If you are interested in being on the mailing list for reports from The Benjamin Center, please send an email with your address to wilkinsc@newpaltz.edu. More information about the Benjamin Center is available online.