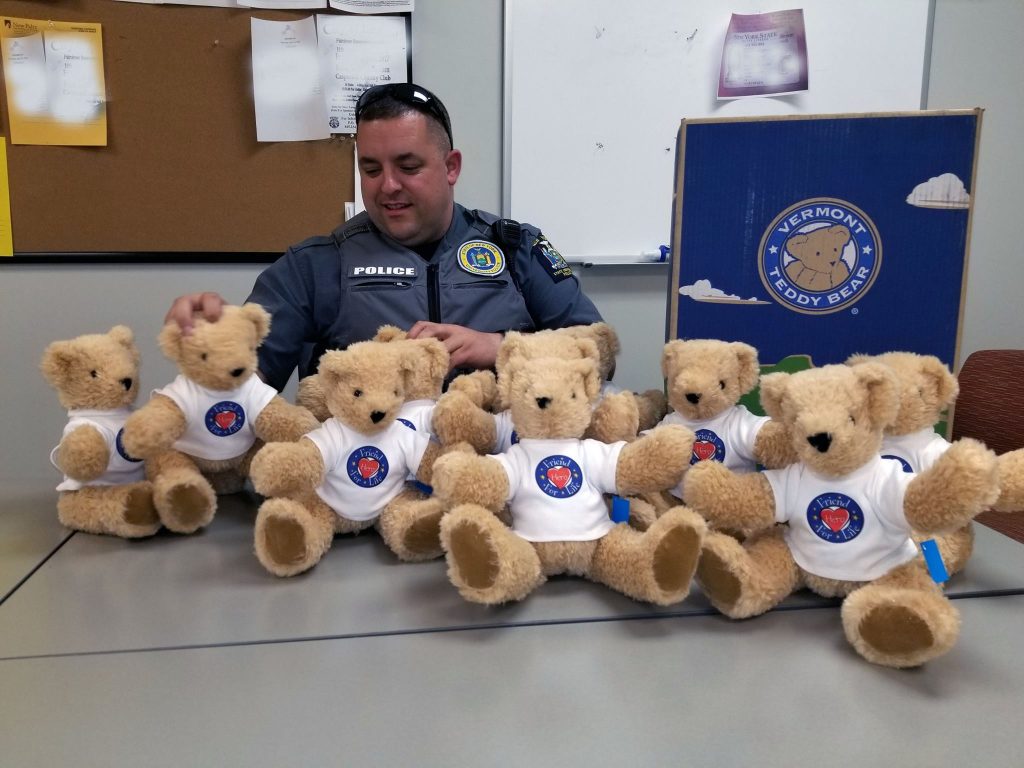 Officer Ryan Law coordinated a donation of Vermont Teddy Bear Company stuffed animals to the University Police Department (UPD), for use in helping calm children in times of duress.

Law got the idea for a program like this while assisting a New Paltz Police Department officer in response to a car accident.

“He pulled one of these teddy bears out of his trunk and gave it to a young child that was in the car accident, and it did exactly what it was meant to do: it calmed the kid down, took his mind off the accident,” Law said. “Right away I realized the value of having these bears available.”

Soon thereafter, Law began the extensive process of requesting a donation from Vermont Teddy Bear. The company receives numerous donation requests and fills them only when they have a surplus, so Law had to submit multiple requests over a period of 18 months before, he said, “lo and behold, I got a box in the mail.”

Law was able to secure enough donated bears to place at least one in each UPD patrol car, and he spread the word among his fellow officers about why there were suddenly stuffed animals in the trunks of their vehicles.

While he originally saw the bears used in the context of a traumatic situation, Law soon realized that they could serve other purposes too – particularly in helping the department build a rapport with community members.

“We’re an open campus and we often see parents walking their kids through here,” he said. “I think it’s important to the College community for us as UPD to always make those guests feel welcome.

“I gave out my first one off campus at a pizzeria in New Paltz. I was standing there waiting for my lunch and I noticed a family walk in with their two young sons. The little one was giving me that look, like he was kind of looking up to me.

“I got the parents’ permission to give the boy the bear and had a little chat with him, and the smile he had on his face was from ear to ear. I remember being there – I always wanted to be a cop – and I felt like something like that could stick with the little guy for a long time.

“Positive moments like that, when we can show them that we’re here to help them, that really goes a long way.”

Officer Law invites other law enforcement agencies to contact him directly (lawr@newpaltz.edu) if they’re interested in learning more about how to set up their own teddy bear programs.