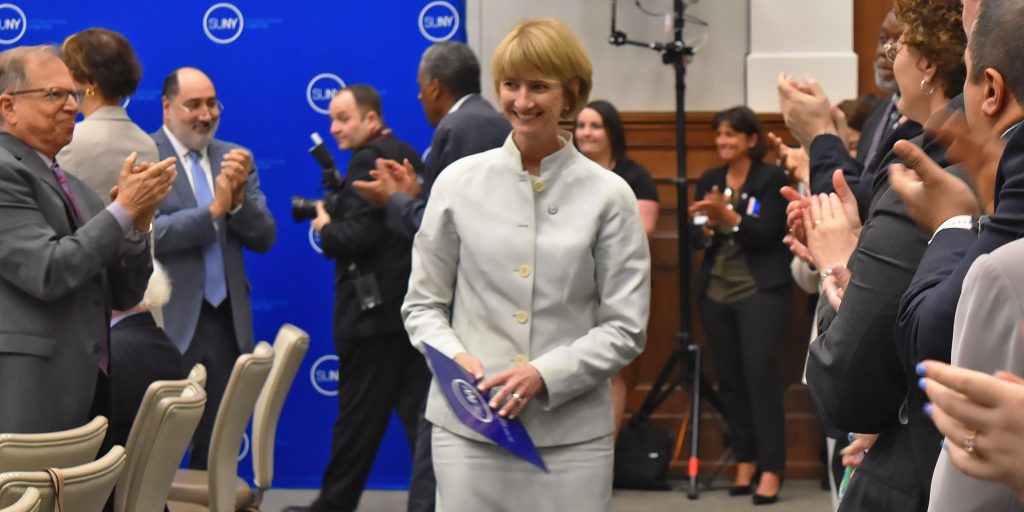 The State University of New York Board of Trustees this week announced the appointment of Kristina M. Johnson as the 13th chancellor of SUNY.

Johnson is a former Johns Hopkins University provost and dean of the Pratt School of Engineering at Duke University. In 2009 she was appointed U.S. Under-Secretary of Energy in the administration of President Barack Obama, with the unanimous consent of the U.S. Senate.

Johnson, who received her bachelor’s, master’s and doctorate degrees in electrical engineering from Stanford University, is an inventor and entrepreneur who holds 118 U.S. and international patents. She is the founder and chief executive officer of Cube Hydro Partners, LLC, which develops hydroelectric generation facilities that provide clean energy to communities and businesses throughout the country.

“I look forward to meeting and working with Dr. Johnson,” said President Donald P. Christian. “She has made significant contributions through her rich and diverse academic, business, and government experience, and is well positioned to lead SUNY, the largest integrated public higher education system in the country, and high-quality master’s level institutions like SUNY New Paltz.”

Johnson’s appointment as SUNY Chancellor is effective Sept. 5, 2017. She will replace outgoing Chancellor Nancy L. Zimpher, who will step down in June 2017 following an eight-year term.

“Dr. Johnson is a proven leader and innovator whose cross-sector experience and strong belief in the power of education will be a great benefit to the State University of New York,” said Chancellor Zimpher. “In academia, she has brought stakeholder groups together to create and implement strategic vision crafted at the hands of many. On the national forefront, she successfully managed and uplifted our country’s most advanced energy research. And as a former faculty member turned entrepreneur, time and again she has bridged the gap between higher education and business to create programs that prepare students for in-demand careers.”

Follow this link to learn more about Kristina M. Johnson and her appointment as the 13th SUNY Chancellor.