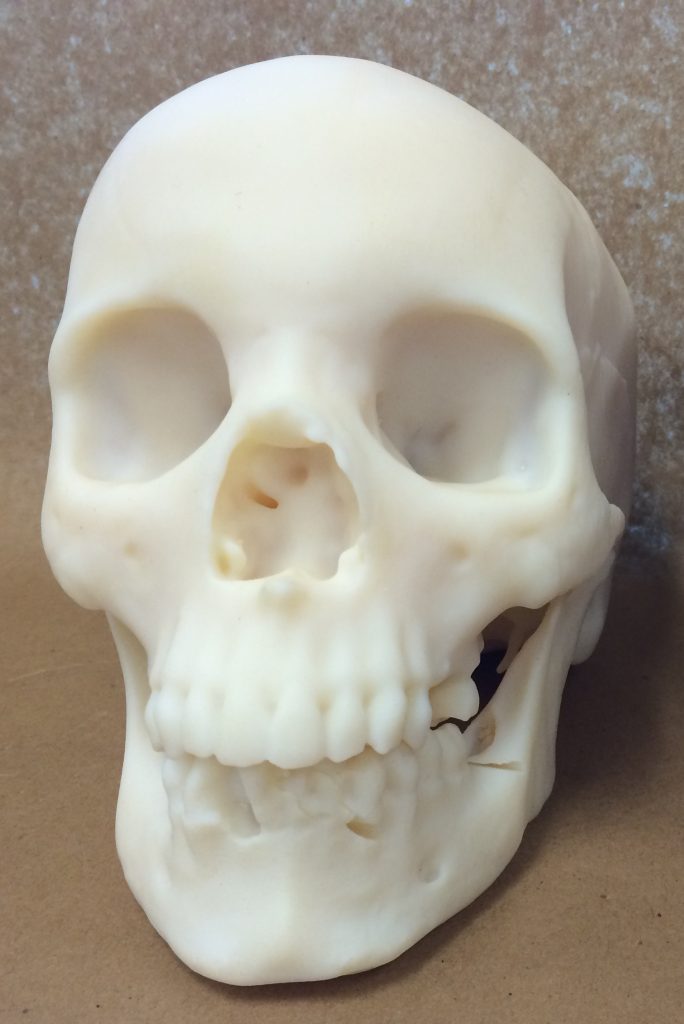 Now, as reported in an April 5 article by the Times Herald-Record, they’re adding homicide investigators to the list.

A team of New York State Police investigators requested that the HVAMC apply their 3D scanning and printing tools to creating an exact replica of a murder victim’s skull.

The replicated skull was one of several investigative avenues employed by Senior Investigator Yan Salomon and his NYSPD team to identify the body of the slain woman, nearly 50 years after she was first discovered by a hunter in Chester, N.Y. in October 1970.

“Jane Doe” had been shot multiple times, but her body was not found until months after the murder. Police were unable to identify her using the technology available at that time.

Police exhumed her body in March 2016 to apply modern investigative techniques to solving this crime: they cross-referenced her fingerprints against a more advanced database, sent her DNA to a lab for analysis, and worked with the HVAMC to produce a 3D printed replica of the skull, which would then be used by a forensic sketch artist to give Jane Doe a face.

HVAMC staff were diligent in working with the investigators on this project for more than one week, demonstrating the 3D design and fabrication center’s versatility and problem solving utility.

The decision to exhume was vindicated when they were able to identify the victim as Evelyn Moore, who had been abducted in the summer of 1970. The State Police identified the victim before the sketch artist could finish using the 3D rendering, and have moved on to investigating possible subjects.

About the HVAMC
The Hudson Valley Advanced Manufacturing Center (HVAMC) at SUNY New Paltz is the nation’s leading academic center for 3D printing applications. The HVAMC was the first academic lab to receive the Stratasys MakerBot Additive Research and Teaching (SMART) designation and is home to the world’s first MakerBot Innovation Lab. In addition to creating the highly innovative Digital Design and Fabrication minor, the HVAMC has worked with more than 150 companies and entrepreneurs on an enormous range of prototyping and end use projects. The Chronicle of Higher Education, the leading higher education trade publication, recently showcased 3D printing at SUNY New Paltz in their highlights of 50 years of technology in higher education.