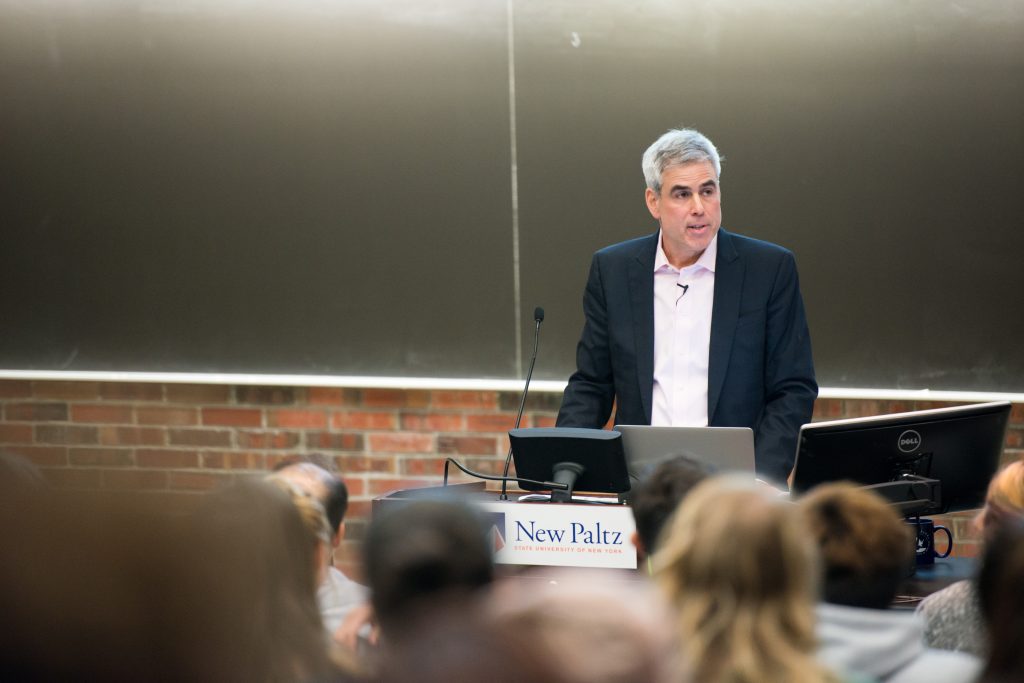 Jonathan Haidt, the Thomas Cooley Professor of Ethical Leadership at New York University’s Stern School of Business and a celebrated scholar of moral psychology, spoke before a standing-room-only crowd of SUNY New Paltz students, faculty and staff on Sept. 29.

[Click here to watch Haidt’s talk in its entirety]

Haidt’s talk, titled “How two incompatible sacred values are driving conflict and confusion in American universities,” draws from research conducted across the social sciences. In it, Haidt argues that the recent shift in higher education toward policies and practices motivated by social justice advocacy and reform obstructs a more traditional function of colleges and universities: the pursuit of truth.

“For more than 2,500 years, the institution of the university has been a place where scholars come together, argue and debate, and, in the process, find truth,” Haidt said. “But starting in the 1990s, things began to change in the academy. The mission of change itself, of using the academy to promote social justice, became more common. Many of these changes were wonderful, needed and overdue. But, I think they set in motion a process that has led to the confusion, fear and dysfunction that is now affecting most of America’s top universities.”

Haidt ultimately contended that the best way to overcome the challenges posed by the shifting priorities in higher education is a “schism” – a clean division between universities that choose to pursue truth above all else, and those that prioritize the advancement of social and political causes.

The themes of Haidt’s talk are relevant to ongoing dialogues in higher education at both the national and local levels. Colleges across the nation have endured an array of divisive and well-documented events borne of disagreements about how best to serve their students and their communities.

SUNY New Paltz is no exception to this trend. During the spring ’16 semester, a media and politics debate featuring one liberal and one conservative speaker was scheduled and then cancelled by student activities organizers, following a period of impassioned criticism of one of the speakers’ political views by some members of the New Paltz faculty and staff. The cancelled debate has been rescheduled to take place on Oct. 20.

“The task force supported our need to provide appropriate framing for the potentially provocative and difficult conversations we may experience, on campus and in the broader exchanges that must occur in a vibrant society,” President Christian said.

The task force also developed a “Free Speech on Campus” resource guide, which includes information about SUNY New Paltz policies pertaining to speech and campus climate; media coverage and a message from President Christian regarding the spring 2016 debate cancellation; and links to a number of relevant articles on the subject of free speech in higher education, including Jonathan Haidt’s oft-cited Atlantic article “The Coddling of the American Mind.”

Further reading about free speech issues at college campuses can be accessed at the website of the Heterodox Academy, a collective of politically diverse scholars, including Jonathan Haidt, who advocate for viewpoint diversity in higher education.