Thanks to a generous $237,000 contribution from McKenna Productions, six endowed scholarship funds have been established in honor of six extraordinary and beloved theatre professors at SUNY New Paltz.

“These gifts, which are a direct result of continued community support and past ticket sales, will be a valuable asset to students and their future endeavors,” said Joseph C. Paparone, professor emeritus and a 43-year veteran of the SUNY New Paltz Department of Theatre Arts. “These funds help recognize the many hardworking students and their admirable devotion to theatre arts.”

The Professor Raymond T. Kurdt Endowed Student Travel Scholarship Fund will support theatre student attendance at design and technology conferences such as the United States Institute of Theatre Technology (USITT) annual national conference, or other theatre conferences that focus on design and technology. This Fund will help to defray some of the student cost (registration, travel, room and board) of attendance and is named in honor of alumnus Raymond T. Kurdt ’56 (Art Education).

The Professor Frank Kraat Endowed Student Travel Scholarship Fund will support annual non-renewable scholarships to theatre students attending the London Theatre Seminar, an annual three-credit course, established by Professor Emeritus Frank Kraat. This scholarship will help to defray some of the student cost (tuition, travel, room and board) of attendance.

The Joseph C. Paparone Endowed Student Travel Scholarship Fund was established to support theatre student attendance at performance festivals such as The Humana Festival in Louisville, Kentucky, the KCACTF (Kennedy Center American College Theatre Festival), or other theatre festivals that focus on performance.

The Dr. Beverly M. Brumm Endowed Scholarship Fund will support an annual non-renewable scholarship to a SUNY New Paltz Theatre Arts major with a concentration in Theatre Performance entering his or her senior year.

If you would like to make a gift to support one of McKenna Productions six endowed scholarship funds you can do so online. Click here and indicate you would like to direct your gift to “other” and type in the name of the endowment. Gifts may also be sent to the SUNY New Paltz Foundation at 1 Hawk Drive, New Paltz, NY 12561. Please indicate the name of the endowment on your gift. 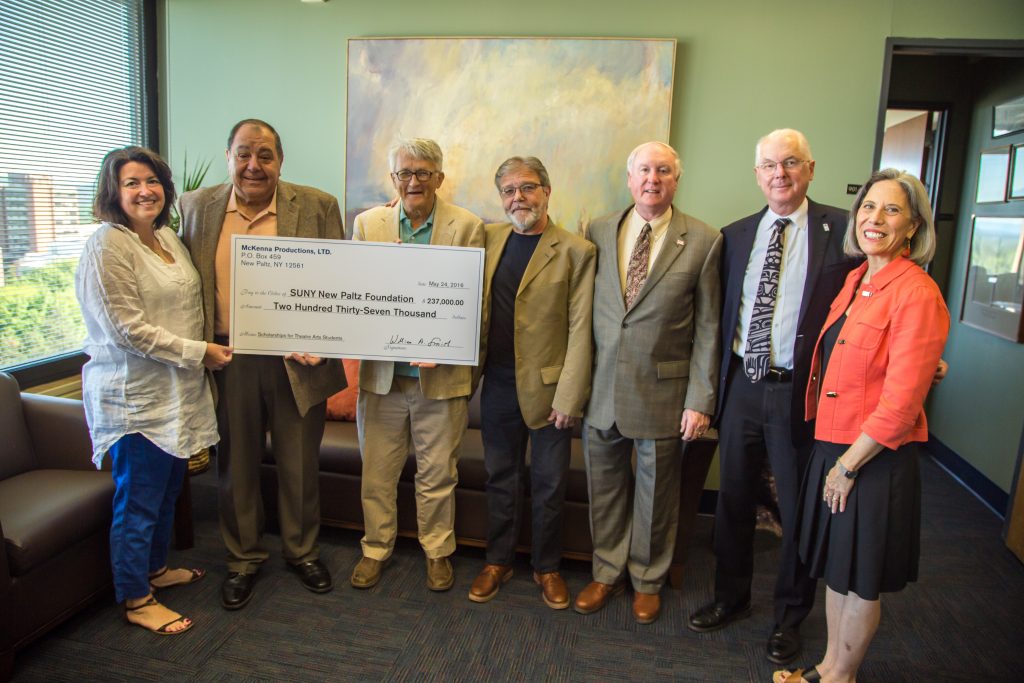 McKenna Productions has been supporting the students of the Department of Theatre Arts of SUNY at New Paltz for the last 43 years. From 1973 to 2004 they produced all of the major departmental theatrical productions and profits from these productions have been used as scholarships for theatre students in a variety of ways.