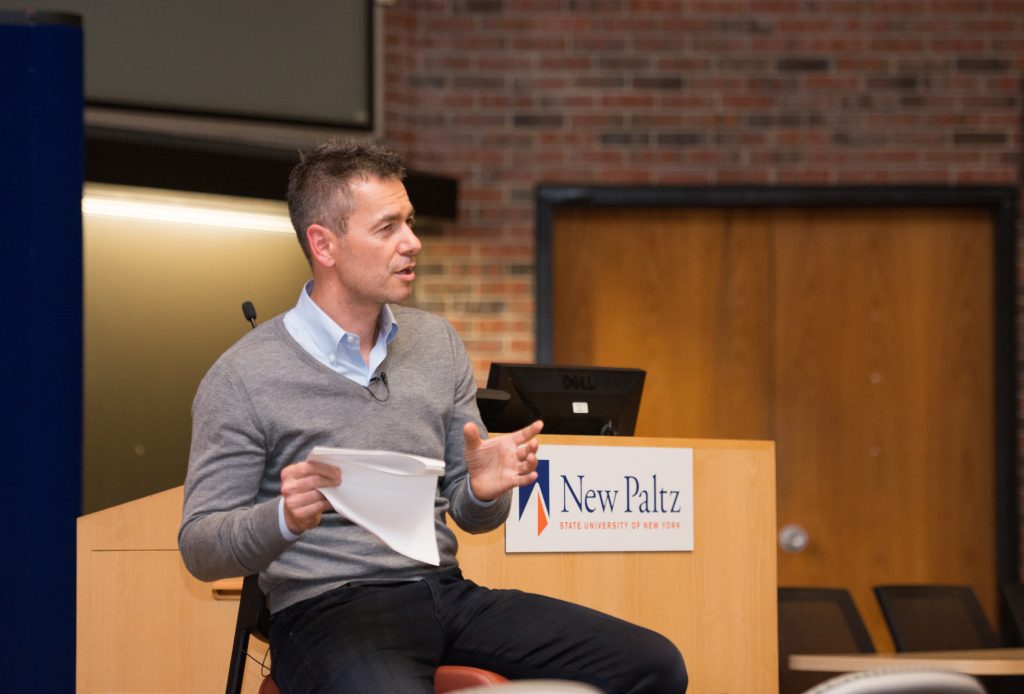 Kyncl spoke before an audience of hundreds of students, faculty, staff, alumni and community members about his life’s journey, from growing up in communist-controlled Czechoslovakia to becoming a key figure in the globalization and popularization of media production and consumption on the web.

“In my life behind the Iron Curtain, we did not have access to information; now, I get to work for a company that provides that access across the whole world,” Kyncl said. “This work has a special meaning for me that goes beyond entertainment.”

Kyncl, who prior to joining YouTube was vice president of content at Netflix, has been on the front lines of the dramatically expanding media landscape for many years. He offered a summary of how the openness of the Internet has disrupted both business and policy, raising new questions about intellectual property and censorship that are still unanswered in many regions around the globe.

“Media as we knew it was built in a disconnected, pre-Internet world,” Kyncl said. “You saw a lot of aggregation, and ultimately, just a handful of very large media conglomerates, owned by just a few people, determined what most people read, listened to and watched. Then, the Internet comes; suddenly people are expressing themselves in writing, music and video, without needing to ask anybody for permission to distribute it, and audiences are reading and viewing and listening to this content.

“This may not feel so powerful to us here, because we have it already, but there’s a lot happening behind the scenes that affords that openness, and there are many places around the world that still don’t have it at all. We stand by our position that people should not be persecuted for what they watch and what they upload on YouTube, but regulations about the freedom of information are highly variable from country to country. This makes my work a challenge, but also very rewarding. It’s a battle that’s worth fighting.”

Kyncl reserved a few moments in his address to speak candidly to these and the many other alumni in the audience about the value of the time he spent at SUNY New Paltz.

“I received an education here that propelled me to do things I wouldn’t have been able to do without it,” Kyncl said. “I also met my beautiful wife, Luz, here. But in addition to all that, New Paltz was really my way to America from Czechoslovakia, my first new home in my new country.”

Luz Avila Kyncl ’96 (Psychology), alumna and nutritionist, was also on campus this weekend, and met with students and members of the campus community as a featured speaker at the biannual Educational Opportunity Program (EOP) Conference, held on April 30.

“Events like these present our students with an extraordinary opportunity to meet with successful alumni of the College, and hear them talk about their lives, their livelihoods and the career paths, twists and turns that led them to where they are,” said College President Donald P. Christian. “We thank Robert and Luz both for returning to their alma mater to engage with our students.”