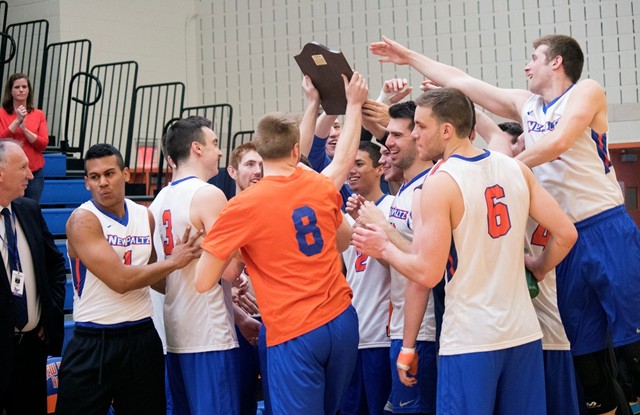 For the second time in program history, the SUNY New Paltz men’s volleyball team has won the United Volleyball Conference (UVC), as the Hawks downed Stevens Institute of Technology, 3-0 (25-14, 25-23, 25-20), in the UVC Tournament final on April 10.

“It felt really good,” Smith said when asked about how it felt to win the championship on New Paltz’s home court. “We had a nice crowd, and we came out with a lot of energy today. We passed and served way better than we did yesterday. I think, overall, the team was really focused. Kevin did a great job on defense, and we blocked really well. Those things led us to a nice win today.”

New Paltz, the top seed in the UVC Tournament, rises to 30-2 overall and stretches its winning streak to 29 with the victory. The Hawks have yet to lose to an NCAA Division III team this season and became just the fifth team in program history to reach the 30-win plateau.

New Paltz earned the UVC’s automatic bid into the NCAA Division III Tournament with the victory, and will learn of its placement in the bracket on April 11. New Paltz will be making its third straight appearance in the NCAA Tournament. The Hawks advanced to the semifinal round of the NCAA Tournament in each of its previous two appearances.