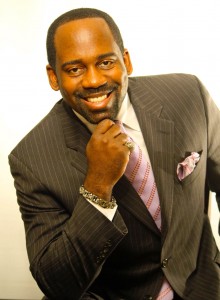 “I think the EOP experience was rewarding for all of the First World students,” said Blackmon, who is now vice president of public affairs for FreshDirect, a leading online fresh food grocer. “We care about New Paltz deeply and many of us are still friends.”

“FreshDirect is committed to being a great community partner,” said Blackmon. “I work closely with local officials and organizations to develop new opportunities to give back, get involved and forge even deeper relationships in the communities we serve.”

Blackmon brings more than 15 years of public service, community development and government experience to FreshDirect. He previously worked for the New York City Department of Parks and Recreation, where he served as the deputy commissioner for community outreach.

“Ultimately if it wasn’t for New Paltz and the EOP program, I wouldn’t have the career path that I ultimately landed in,” said Blackmon. “There is a certain level of pride in being a SUNY graduate and within EOP there is a sense of family and a strong bond that propels us forward. The sense of community I found there has stayed with me, it transcends.”

A member of the first Black Greek Letter Fraternal Organization, Alpha Phi Alpha Fraternity Incorporated and also a member of the Pi Alpha Alpha National Honor Society, Blackmon was recognized as one of the “40 under 40” people to watch in both City and State News and the Network Journal.

Featured in numerous media outlets and also known as a dynamic public speaker, Blackmon currently holds a master’s degree in public administration from Metropolitan College of New York, where he also serves as an adjunct professor teaching courses in collaborative leadership, non-profit management and intergovernmental relations. He is currently finishing an executive certificate program in leadership and organizing from Harvard University.  He resides in Harlem, New York and is an active member of the community.