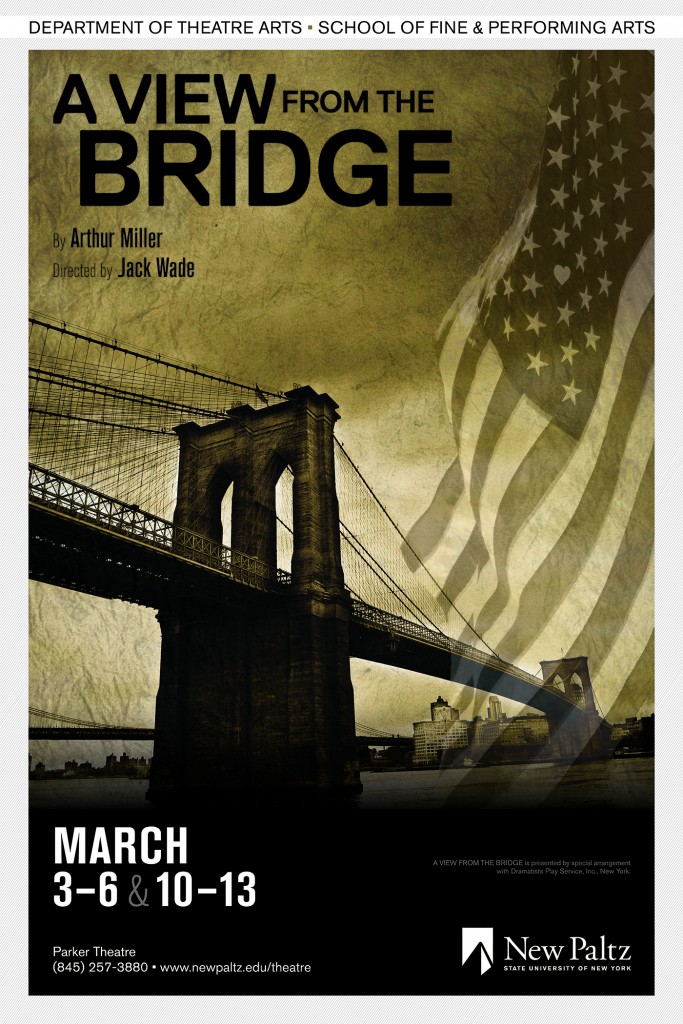 A dark and passionate tale, A View from the Bridge is set in Red Hook, Brooklyn, where longshoreman Eddie Carbone welcomes his wife Beatrice’s Sicilian cousins, Marco and Rodolpho, to the land of freedom. When one of them falls for Eddie’s beautiful niece, Catherine, they discover that freedom comes at a price. Eddie’s jealous mistrust exposes a deep, unspeakable secret – one that drives him to commit the ultimate act of betrayal.

A View from the Bridge: Cast & Direction Interviews – Professor Thomas Olsen’s Seminar in Critical Practices English course sat down with the cast and directors of Theatre’s upcoming production of Arthur Miller’s classic play “A View from the Bridge.” Click the link to hear more!

Prior to the March 4 performance, Professor Thomas Olsen of the Department of English will moderate a pre-show panel discussion at 6:30 p.m. in Parker Theatre. The panelists will be Larry Carr, lecturer in the Department of English; Morgan Gwenwald, associate librarian in the Sojourner Truth Library; and Reynolds Scott-Childress, assistant professor of History. They will share their ideas and expertise on Arthur Miller’s life and work, and on the cultural conditions represented in this particular play. This event is free and open to the public (though tickets must still be purchased for entry to the performance following the panel).

About the Director
A theatre historian, Jack Wade designs lighting and scenery and directs in the departmental main-stage season. He is a recipient of the Theatre Crafts International Award for Outstanding Achievement in Theatrical Design and Technology, and his designs have been seen Off-Broadway and in many regional theatres across the country. His recent play, Red Masquerade, was recognized for distinguished achievement by the Kennedy Center American College Theatre Festival. Wade, who is a member of United Scenic Artists, has also been a valued mentor to many student designers and performers who have gone on to work in the professional theatre, television and film industries.