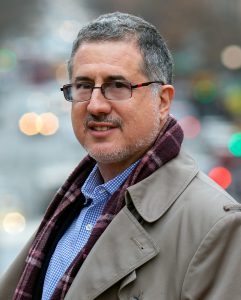 In 2014, Gellman led the team that won the Pulitzer Prize for Public Service for coverage of Edward Snowden and the National Security Agency. He was also awarded the 2008 Pulitzer Prize for National Reporting for his series on Vice President Dick Cheney, and in 2002, was a member of the team that won the Pulitzer Prize for coverage of the 9/11 attacks and their aftermath. He authored the New York Times best sellers Dark Mirror: Edward Snowden and the American Surveillance State and Angler: The Cheney Vice Presidency.

Gellman began his career with the Washington Post in 1988, and is currently a staff writer at The Atlantic. At the magazine, he is given the freedom to pursue his interests exploring politics and current events. “The Atlantic gives me the freedom to use my own voice,” Gellman says of his writing whether that be shorter web articles, or mid-sized and larger cover stories such as his most recent article “Trump’s Next Coup Has Already Begun.”

This spring, Gellman teaches the upper-level journalism seminar “The Literature of Fact,” where he applies fiction writing techniques to the practice of non-fiction reporting. The process involves a deeper dive into subject matter and often requires multiple interviews and document searches, the result of which is a longer magazine style article that affords the writer space to explore the given subject matter. Guest speakers to Gellman’s class have included Adam Serwer, David Maraniss, Jennifer Senior, and Emily Bazelon, who have volunteered their time to share their experiences in the field of journalism.

Key qualities for a journalist, according to Gellman, are curiosity, open-mindedness, patience, persistence and attention to detail.  “A journalist’s job is to find out what is true and explain it,” he said.

Gellman participated in a Q & A session with President Donald P. Christian on Feb. 7, 2022. The event was a hybrid, allowing for both in-person and remote attendance. In describing his affinity for newspaper reporting from a young age, Barton explained of his chosen profession, “I love the chance to be curious for a living.” The exchange covered the gamut of Gellman’s varied work experience discussing topics from confidential sources and national security to journalistic integrity and the future of the profession.

The James H. Ottaway Sr. Visiting Professor of Journalism is SUNY New Paltz’s only endowed professorship. The Ottaway Visiting Professor position was established in 2000 by James H. Ottaway, Jr. ’18 HON and Mary Ottaway ’70g (Elementary Education). James H. Ottaway Sr. was a publisher of community newspapers, founded Ottaway Newspapers Inc. (formerly the Dow Jones Local Media Group) and led the American Press Institute in Reston, Va. The program brings a journalist to campus each spring for one semester, providing students the opportunity to learn from the experience of working journalists.