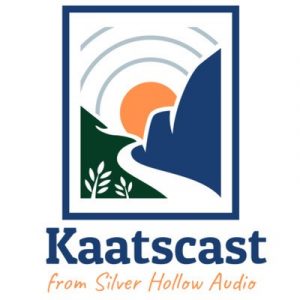 Brett Barry, Lecturer (Digital Media and Journalism), audio producer, and owner of Silver Hollow Audio, is the host and creator of the Kaatscast podcast. Kaatscast, which began in January of 2020, offers biweekly podcasts focused on the history, arts, and culture of the Catskills area and the greater Hudson Valley, with a focus on stories of sustainability. Barry’s work on Kaatscast has allowed him to collaborate with faculty colleagues and students and enhanced his work teaching a new podcasting course on campus.

Recently approved as an ongoing course to be offered each semester, the podcasting course utilizes space within the DASH lab, which is located within the Sojourner Truth Library. The department purchased additional equipment specific to the medium of podcasting with a special grant received from the Edward Carroll and Gina O’Brien Carroll DMJ Program Development Fund.

Barry likens podcasting to an audio version of a blog where podcasts generally focus on a particular area of interest, industry or activity. “Podcasts can tell a story about a very focused or niche community that you can’t get in traditional broadcast media. In my case, it’s everything that’s happening in and around the Catskills,” he explained.

Podcasts can also preserve the stories and oral histories of a culture and by virtue of the sound technology, often in a subject’s own voice. This can be invaluable for future generations searching to understand a culture’s traditional practice, celebration or foodway. Barry explains, “What I love about doing the podcast work is that it gives you access to people and experiences that you wouldn’t ordinarily have. I feel like you are given a license to another world and the ability to share that with other people.”

While some podcasts are interview-style, others are more documentary style and take inspiration from public radio. Barry crafts his podcast to include storytelling and other audio elements, integrated to recreate the scene that a listener can imagine in his or her mind’s eye. “It’s storytelling, it’s memory, it’s things that will disappear if they’re not locked in somehow. What better way than audio and to be able to hear from the person who’s story it is,” said Barry.

In addition to being used as a pandemic-related tool to estimate potentially infected air, the Aranet4’s carbon dioxide monitor may be used as a general health and wellness tool. The CDC recommendation for indoor carbon dioxide levels is 800 ppm or lower. A carbon dioxide level of 1000 ppm can correlate to a 15 percent drop in cognitive abilities while a level of 1400 ppm correlates to a 50 percent decrease. To protect productivity, levels of alertness and general well-being, it is recommended to stay at or below 800 ppm and to introduce a fresh air source or relocate to a different space when readings are higher.

To test out the device, Kortright took the Aranet4 with him to monitor a variety of locations both in and around campus. His findings in most on-campus spaces varied between 400 and 800 ppm, while an off-campus restaurant and a campus evening event registered at 1500 and 2500 ppm respectively. Kortright’s home readings ranged between 600 to 1100 depending on how many people were inside a given space. Overall, the tool functioned as expected, yielding higher readings in more densely populated spaces.

Barry employs one DMJ student per semester to intern for Silver Hollow Audio. Students earn real life experience in a variety of audio production positions including work on audiobooks, voiceovers, on-air promos and narration. Students can try their hand at a variety of positions assisting with the company’s podcasts including researcher, audio engineer, editor or sound recordist, depending upon their degree of involvement on a particular project. Students interested in applying for an internship can apply online on the DMJ internship webpage or contact Barry directly via email.

Another recent episode of Kaatscast visited the small town of Jewett, New York to highlight a fundraiser for Ukraine that yielded an astounding $14,392.00 from the sale of Ukrainian varenyky. For this episode, Barry collaborated with Assistant Professor Megan Sperry (DMJ) who is also a documentary filmmaker and Ulster County legislator. With donated food supplies, fundraiser organizer Switlana Breigle and volunteers used the St. John the Baptist Ukrainian Catholic Church facilities to prepare and cook varenyky, the Ukrainian version of pierogi. Varenyky are small dough pockets stuffed with potatoes, cheese, and onions, and served with a side of sour cream. The community came out to support the cause and all funds raised were donated to the Ukrainian-American Freedom Foundation. The podcast explores the group’s fundraising efforts along with the Ukrainian heritage alive within the Catskill mountains.

Upcoming Kaatscast episodes include an audiobook edition of author Leslie T. Sharp’s Bluebird Chronicles followed by an interview with the author. Additional episodes will include an interview with a local fly fisherman who is also the Communications director for the Bronx Zoo, and a visit to a flower CSA (Community Supported Agriculture).