Congratulations to the College of Liberal Arts & Sciences faculty for their notable publications, presentations and honors.

Instructors Mette Christiansen (Sociology) and Katherine Raynor (Sociology) joined 12 students in Sociology’s Human Services concentration in presenting at the National Association of Child Care Workers (NACCW) and CYC-NET World Conference in Durban, South Africa, as part of the summer study abroad course, “International Social Welfare and Social Development in South Africa.” The presentation was developed through collaboration with Child and Youth Care Worker students at Durban University of Technology and their faculty member, Fathima Dewan. The students and faculty presented on their respective educational programs with the presentation title: “Nation Building – One Student at a Time!” in line with the conference theme of “Nation Building – One Child at a Time!”  After the conference, the students and faculty flew to Cape Town, joining partners from six different NGOs/human services agencies. The students’ internships included homeless shelters, children’s homes, and a school for children from the poorest township areas. These internships provided the students with a rich opportunity to learn about human services in a social development context. 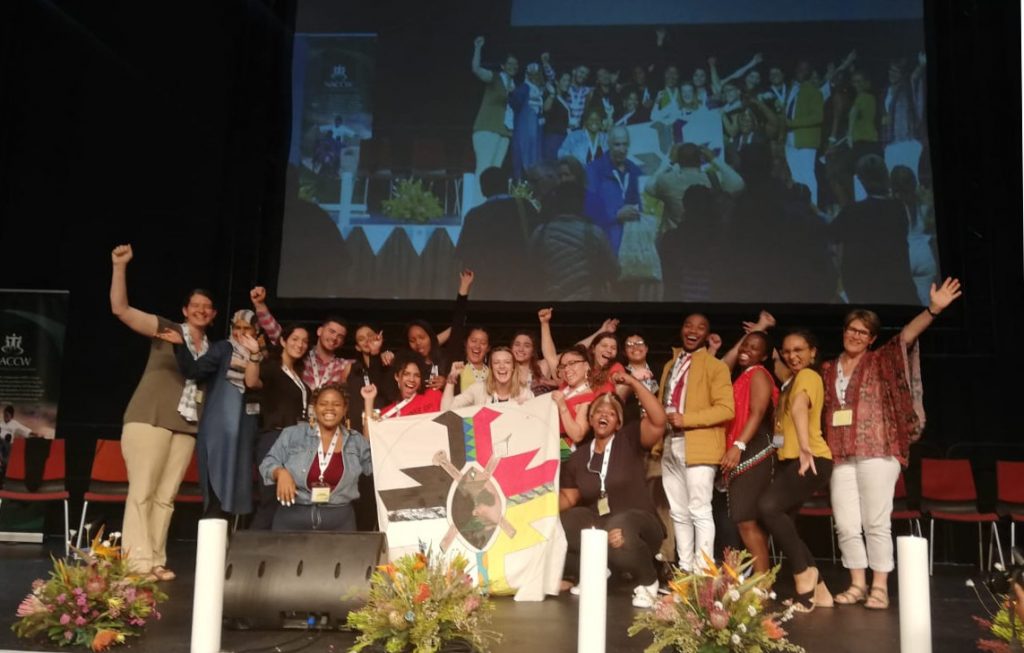 rofessor Nathen Clerici (Languages, Literatures & Cultures) published the article “Yumeno Kysūaku and the Spirit of the Local” in Japanese Studies.

arolyn Corrado (Sociology) published a book review of Barbara J. Risman’s 2018 book Where the Millennials Will Take Us: A New Generation Wrestles with the Gender Structure in Contemporary Sociology.

Professor Victor deMunck (Anthropology) coauthored, with Giovanni Bennardo, the article “Disciplining Culture: A Sociocognitive Approach” in Current Anthropology. He also coauthored, with Christopher Manoharan, the article, “Accessing the Interiority of Others: Sufism in Sri Lanka” in the Journal of the Royal Anthropological Institute. He authored the book Romantic Love in America: Cultural Models of Gay, Straight, and Polyamorous Relationships (Lexington Books), which was one of two books awarded the inaugural Society for Anthropological Sciences (SAS) Book Prize.  The SAS promotes empirical research and social science in anthropology.

Associate Professor Heinz Insu Fenkl (English) published The Red Years: Forbidden Poems from Inside North Korea. The Red Years represents the first collection of poetry to be translated into English of the poet and author known by the pen name “Bandi.”

Professor Glenn Geher (Psychology) coauthored, with Nicole Wedberg ’16 (Psychology) the book Positive Evolutionary Psychology: Darwin’s Guide to Living a Richer Life. He has also had four journal articles recently appear, including “You’re Dead to Me! The Evolutionary Psychology of Estrangements and Social Transgressions” in Current Psychology, coauthored with Vania Rolon, Rich Holler, Amanda Baroni, Morgan Gleason, Eden Nitza, Gratia Sullivan, Graham Thomson and Jacqueline Di Santo. Geher is also a co-author on the article “The Neural and Genetic Correlates of Satisfying Sexual Activity in Heterosexual Pair-Bonds,” which appeared in Brain and Behavior, with B. Acevedo (UC Santa Barbara), M. Poulin (SUNY Buffalo), S. Grafton (UC Santa Barbara), and L. Brown (Albert Einstein College of Medicine). Geher’s coauthored papers “Do Males Vary More across the Board?” and “Crayons, Darwin, and the Evolution of Life,” also appeared in the EvoS Journal. In addition to his scholarly publications, Geher was recently recognized for Outstanding Academic Advising at the annual conference for NACADA: The Global Community for Academic Advising, which was held in Louisville, KY. This award is part of NACADA’s Global Awards Program. Some of the criteria for the award include the availability to advisees, faculty, and staff; frequency of contact with advisees; mastery of institutional regulations, policies and procedures.

Professor Giordana Grossi (Psychology) joined neuroscientists Gina Rippon (Aston University) and Daphna Joel (Tel Aviv University) on a panel at Barnard College in September to discuss the latest breakthroughs in neuroscience that dispel the myth of male versus female brains. The panel was entitled “A Gendered Brain? Shattering Sexist Science.”

Assistant Professor Kristopher Jansma (English) published the short story “The Samples” in the June issue of The Sun magazine.

Associate Dean and Professor Nancy Johnson (English) published the book The Court Journals and Letters of Frances Burney, Vol. 6, 1790-June 1791. Johnson also published “Literary Justice: Representing the London Treason Trials of 1794” in Political Trials in an Age of Revolutions:  Britain and the North Atlantic, 1793-1848, edited by Michael T. Davis, Emma Macleod and Gordon Pentland, and “The Social Contract and Child Labor in Elizabeth Barrett Browning’s ‘The Cry of the Children’” in A Cultural History of Law:  The Age of Reform, edited by Ian Ward.

Associate Professor Benjamin Junge (Anthropology) published the article “‘Our Brazil Has Become a Mess’: Nostalgic Narratives of Disorder and Disinterest as a ‘Once-Rising Poor’ Family from Recife, Brazil Anticipates the 2018 Elections” in the Journal of Latin American and Caribbean Anthropology. Junge, a Woodrow Wilson Center Fellow, was featured in the center’s film “Driving for Uber: Class Mobility and Uncertainty in Modern Brazil,” which explores Brazil’s growing gig economy against the backdrop of the country’s political and economic woes.

Professor Douglas Maynard (Psychology) coauthored, with Tim Kasser and Andrew Perry, the article “An Experimental Laboratory Test of the Effects of Alternative Indicators of Progress” in Social Indicators Research.

Assistant Professor Simin Mozayeni (Economics) received the Ellis Island Medal of Honor on May 11 in New York City. This made her a member of the Ellis Island Honor Society, which celebrates the achievements of outstanding immigrants. This medal embodies the spirit of America, celebrating diversity, tolerance and service. Past recipients include a diverse group of honorees, including six U.S. presidents, Prince Albert II of Monaco, Senator John McCain, Secretary of State Hillary Clinton, Rosa Parks, and celebrities in academic and industrial leaders, among others. In addition to this honor, Mozayeni also published the invited article “Social Security Income and Household Savings: A New Model and Evidence” in the Journal of Accounting and Finance.

Professor Jonathan Raskin (Psychology) was elected president of the American Psychological Association’s Society for Humanistic Psychology (Division 32). He will serve as the president-elect during 2019-20 and president during 2020-21.

Professor Anne R. Roschelle (Sociology; Women’s, Gender, and Sexuality Studies) published the book Struggling in the Land of Plenty: Race, Class, and Gender in the Lives of Homeless Families.  The book is based on a four year ethnography in San Francisco and examines how socially structured race, class, and gender inequality contributed to the rise in family homelessness and the devastating consequences for parents and their children. Roschelle will be presenting research from the book at her alma mater, The University at Albany, in October, at University of San Francisco in November, and University of Georgia in April 2020.

Professor Jan Zlotnik Schmidt (English) published the full-length poetry volume Foraging for Light (Finishing Line Press). She also published the poems “A Glint in Parchment” in the Eastern Iowa Review:  Best in Lyric Prose Plus Anthology and “Not My Father” in The Broadkill Review.

Assistant Professor Rachel Somerstein (Digital Media & Journalism) published “Rates of Mistreatment for Women in the US Are High Across the Board—Especially for Women of Color” in the Boston Globe and “How Women Photographers Can Expand Our View of Conflict” in the Women’s Media Center’s “Women Under Siege.”  Somerstein also presented scholarship on sexual harassment’s effects on photographers at the Association of Educators of Journalism and Mass Communication in August and on the ways gender shapes photographers’ assignments, access to stories, and opportunities for advancement at the International Communication Association in May.

Associate Professor Roberto Velez-Velez (Sociology) was awarded in July a three-year National Science Foundation grant in collaboration with Jacqueline Villarrubia-Mendoza (Colgate) to continue their field research on centros de apoyo mutuo (mutual support centers) in post-Hurricane Maria Puerto Rico. In August, Velez-Velez was asked to write a piece for NACLA news online on the popular assemblies that emerged after the protest wave that ousted the governor last July. The official journal of the International Sociological Association, Current Sociology, featured Velez-Velez and collaborator Villarrubia-Mendoza as “Sociologists of the Month” for October in their latest issue based on a well circulated article they published in the journal’s Spring 2018 issue, “Interpreting Mobilization Dynamics Through Art: A Look at the DREAMers Movement.”