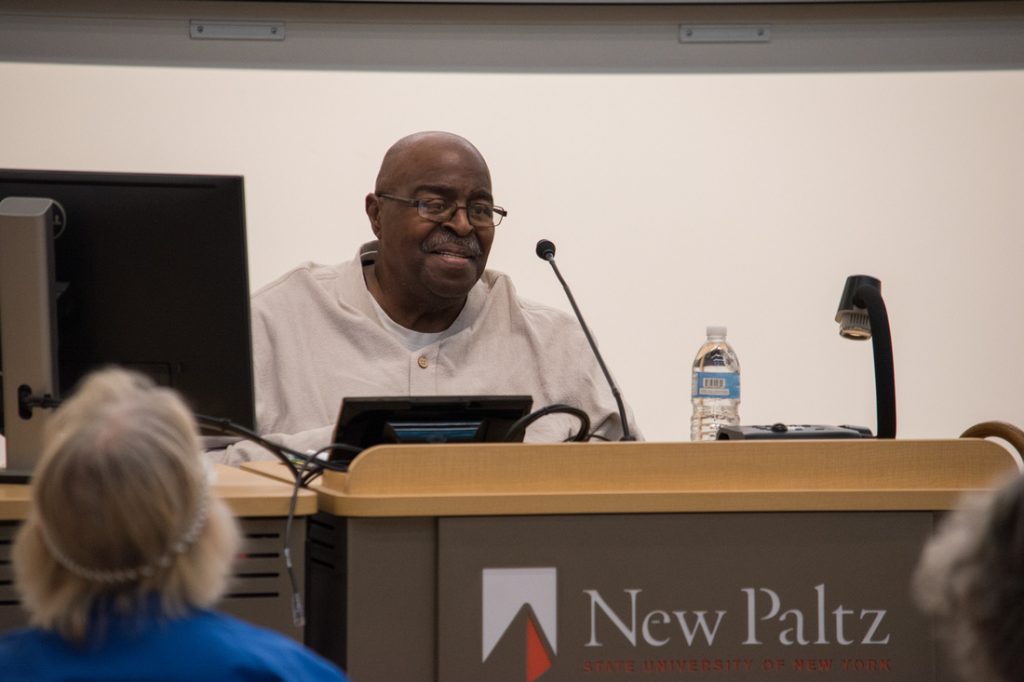 Odell Winfield gave a stirring talk on Sept. 15 about his work as director of the A.J. Williams-Myers African Roots Community Center Library, a vital, Kingston, New York-based resource named after former professor and chair of the College’s Department of Black Studies.

Winfield spoke broadly about his work as an advocate for community-based education, and about his relationship with Williams-Myers.The two were first acquainted when Winfield was released from prison as a youth, and Williams-Myers quickly became a mentor to the younger man.

“A.J. was one of my scholars and was a blessing to many of us who knew him,” he said.

Winfield’s lecture on library services for underserved communities built on a personal narrative of his overcoming childhood adversity and a series of discouraging experiences in the public school system.

“When I was in third grade, I realized I had to find my own self-confidence because I wasn’t going to get that from the public education system,” he said. “I read about Emmett Till in Jet Magazine, and I knew I had to do something to change this.”

Those early experiences set Winfield on a trajectory, working on passion projects and helping establish resources where African American children could learn about their heritage. It was as he was first embarking on this work that he met Williams-Myers and other civil rights activists in the Hudson Valley area.

After moving to Poughkeepsie, New York, in the late 1990s, he established the Sadie Peterson Delaney African Roots Library in 2001 at the Family Partnership Center. The library was named after a Poughkeepsie native who became an acclaimed bibliotherapist (a therapist who addresses mental health issues through reading and literature).

The A.J. Williams-Myers Library followed in 2017. Located in Kingston, it aims to promote literacy through teaching and learning about the African roots experience, and to honor and encourage the transmission of history through written and oral history, spoken word, paintings, cultural artifacts and other forms of artistic expression.

Following his lecture, Winfield was praised by New Paltz Black Studies Lecturer Anthony Dandridge, who touted his dedication to being a role model for African American youth.

As a token of his appreciation, Dandridge presented Winfield with Williams-Myers’ old placard from when he chaired the Department of Black Studies.

“I felt a cultural responsibility to take this and make sure it gets to you,” Dandridge said to Winfield.

About the Dennis O’Keefe Lecture

The O’Keefe Lecture is sponsored by the Friends of the Sojourner Truth Library. Since 2007, the Friends have honored library staff member Dennis O’Keefe with an annual fall lecture, always open to the public, that celebrates O’Keefe’s intellectual curiosity, range of interests, and public spirit.