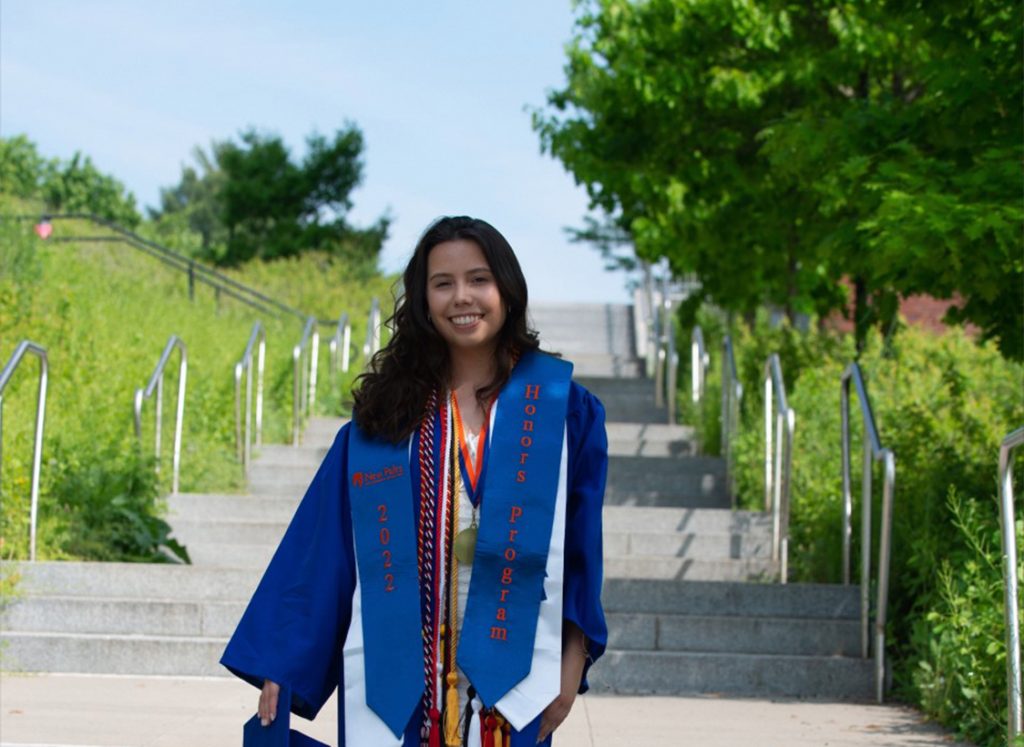 As eviction and housing crises loom over the U.S., recent SUNY New Paltz graduate Sarah Bale-Crowder ’22 (English) saw an opportunity to elevate research on this issue and advocate for fair housing practices.

Her scholarly interest in this subject stems from her own experiences working within the affordable housing movement. While a student at New Paltz, Bale-Crowder interned at For the Many, a Hudson Valley-based grassroots organization working to lower the cost of living for New York residents.

Her time in that role gave her first-hand exposure to stories of local renters facing the prospect of eviction. A recent Washington Post report indicated that in many Mid-Hudson Valley counties, average housing costs have risen 11% or more since early 2020.

“When I spoke on the phone with different constituents, I saw how dire an issue this was,” she said.

She drew on that experience for her Honors Program thesis, an interdisciplinary research project in the 2021-22 academic year, under mentorship of Associate Professor of Political Science Daniel Lipson and Professor of Sociology Annee Roschelle.

The end result, “‘The Rent is Too Damn High’: Why Renters Deserve More Affordable Housing Policies in the United States, Such As Good Cause Eviction,” is a thorough investigation of how nationwide rent increases are impacting renters as we emerge from the COVID-19 pandemic.

“The topic is very timely and relevant, particularly in the Hudson Valley, so I wanted to do more in-depth research to examine the overall housing crisis,” Bale-Crowder said.

Working with Lipson, who has studied these issues extensively, Bale-Crowder also demonstrates that rising costs and evictions have disproportionate impact on the poor, women, and people of color.

“The issues of mass incarceration and racial segregation are now firmly in people’s minds, but there is this hidden eviction crisis that only a few have written about,” said Lipson. “I think this issue has emerged during the right time in history.”

Bale-Crowder also explores how public perception of evictions is part of the problem. She compares evictions in the 1930s when Great Depression conditions led to more public protest, to modern times, when evictions are seen as commonplace and generate less communal outrage.

“I think it’s important to speak up about these inequities so that people are aware of what’s happening and that it’s not fair,” she said. “I personally believe everyone deserves a roof over their head.”

This project was just one example of Bale-Crowder’s commitment to public service. During her four years at SUNY New Paltz, she has been involved in New Paltz’ chapter of Sigma Delta Tau, a sorority dedicated to women’s empowerment, and as a peer advisor at the Center for Student Success, providing peer-based academic support for students.

Her next step? She’ll be teaching English to children in Madrid, Spain.

“I’m looking forward to taking a gap year before embarking on anything else,” she said. “This will be a good next chapter.”

About the Honors Program

The Honors Program at SUNY New Paltz supports hundreds of students in pursuing independent and thoughtful research on the issues that matter most to them. Learn more here.