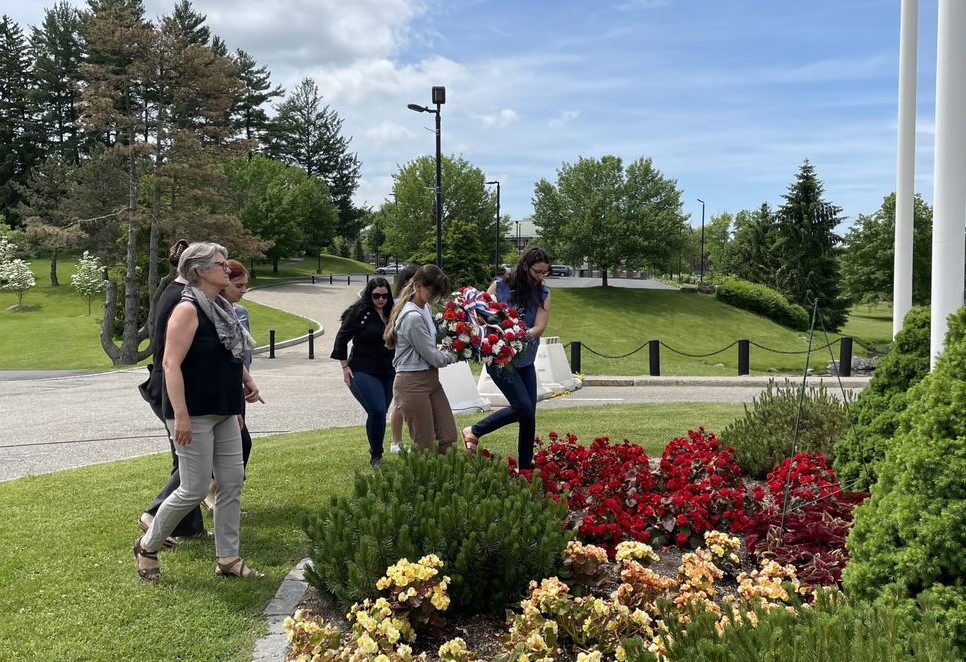 Members of the SUNY New Paltz community joined together on Thursday, May 26, for the College’s 8th annual Memorial Day Wreath Laying Ceremony, honoring those who have given their lives in service to the United States and its ideals.

This year’s program provided a needed moment of solace and togetherness for a campus community that is still grieving the loss of Keith Yennie, a U.S. Marine Corps veteran and father of two who died unexpectedly on April 7.

“Today we pay homage to the one million-plus American service members who have given the ultimate sacrifice for this great nation since the American Revolutionary War began in 1775,” said Jason Gilliland, director of veteran & military services, “but this year, we will also be remembering one of our own.”

Yennie was enrolled in the Department of Sociology: Human Services Concentration at New Paltz and made a meaningful impact on faculty and peers in his cohort during his too-brief time at the College.

“In the concentration we do activities that we call common thirds, and the first one that Keith had enthusiasm for was with a soccer ball that we threw around,” said Instructor Mette Christiansen, who coordinates the human services concentration in the Department of Sociology. “After the activity. Keith gave the ball to me and say, ‘Please pass it on to future cohorts.’ In honor of Keith, my last class of the semester played with the ball.”

Yennie’s passing this spring was all the more tragic given the positive impact he was having in the regional veterans’ community. He had recently started the nonprofit Operation: Got Your Six to help veterans access housing and counseling, especially for managing Post-Traumatic Stress Disorder (PTSD).

“Keith was so passionate about the work he was doing. He was going to help so many people,” said Aryssa Speirs ’22 (Sociology).

Yennie was awarded a posthumous degree from SUNY New Paltz at the Commencement ceremony on May 21, 2022.

The tribute to Yennie added to an event that also included the ceremonial laying of a wreath at the flagpole outside Haggerty Administration Building. The students and faculty from the human services concentration performed the rite, and Adjunct Professor of Music Rebecca Coupe Franks gave a rendition of “Taps” during the wreath laying.