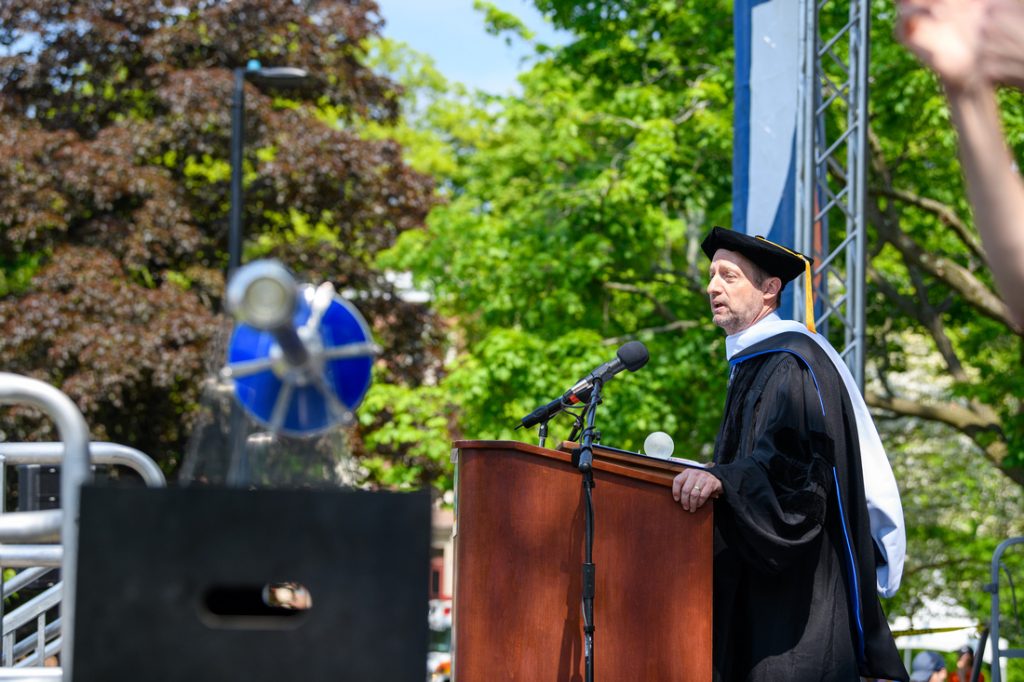 Ed Carroll ’85 (Communication & Media) gave the 2022 Student Commencement Address at SUNY New Paltz on Saturday, May 21. The full address is transcribed below.

I want to start by saying it is a special honor to take part in the final Commencement weekend that President Christian will lead. As a SUNY New Paltz Foundation Board Director, I have had a ringside seat to his principled and effective leadership, steering the university through challenging times and always moving it forward.

It is also a great honor to be addressing this graduating class…because you have overcome so many obstacles to get here…and also your parents….your parents who paid in some cases to send you away to school….only to have you right back at home and spending even more time in front of a screen.  It is a proud day for the students, but equally proud for the parents…congratulations to you all.

It was not that long ago, at least in my own mind, that I sat exactly where you are sitting in front of old main…and we are just a few hundred yards from the lecture center where, at a campus radio station gathering,  i met my future wife Gina O’Brien. I knew immediately that that would be a very significant meeting.  As it turned out it took a while longer for Gina to see the significance of it.  But it was another happy New Paltz story in the end, and she is here today.

My senior year at New Paltz the Career Center helped me line up a full-time internship at IBM, in their communications group…  it was a paid position at the rate of $20,000 a year.  Now, this is in the mid-eighties when a pitcher of beer in town cost $1, so you can imagine…

I went to Marshall’s and got two suits and went to work writing press releases. They asked me to stay on for the summer, after graduation. However, IBM was starting to get their clock cleaned in personal computing with the rise of new companies called apple and dell. And so there was no permanent space for me.

I went from one of the largest companies in the world to a tiny one – a Manhattan PR firm owned by two partners. It paid $16,000 a year. One of the partners was age 72… and the other was old. I can’t say exactly how old, but I can say he died while I was working there and I never realized it.

After a year in the city, I returned to the Hudson valley as a reporter for WPDH radio and its sister local news station. It paid $13,000 a year.

At which point my dad said, “Edward, you do realize how this is supposed to work? You seem to be climbing down the ladder of success.” But he also said, “now is the time you can afford to be poor and figure out what you really want to do.”

After a year of Poughkeepsie radio, I answered an ad for a young cable network back downstate. It paid – $20,000 dollars a year…and I thought, it’s three years later and I’m back where I started, baby.

Now, bravo was a struggling arts channel at the time. Over the next few years, I moved from PR to marketing to programming and we put some original shows on like Inside The Actors Studio and Queer Eye For The Straight Guy.

So.. From that path, hopefully I have learned a few things worth sharing.

This graduating class has demonstrated incredible resiliency to get to this day.  Really and truly, you have had a college experience unlike any before you.

And that has caused you to develop qualities you may not even be aware of – flexibility, resourcefulness, maturity, empathy.

And as you go out into the so-called real world, those qualities are needed more than ever…

And very likely you have learned to exchange different viewpoints in a way that maintains mutual respect…and that is the way to find common ground and move forward….I don’t know when compromise became a dirty word among our leaders…but I do know that in the world of business, much like on college campuses, and in personal relationships, compromise is the way to make progress.

It turns out democracy is more fragile than we thought… And we can plainly see the high price of autocracy in the world today.

When one looks at the history of nations, we see trouble brewing when both parties move to the extremes…and then folks in the middle are told they must choose a side. When winning becomes more important than the integrity of the institution, it’s a bad recipe throughout history – because most empires crumble from within….and the key to keeping democracy alive is to stay informed, to talk to one another…and to listen – respectfully – no one has ever changed their mind about anything by being called an idiot.

Likewise, when you are in the workplace you will come across some folks who you find disagreeable. They are simply not your cup of tea. And my advice to you would be to try hard to find something about them that you like. And keep that thing in the back of your mind when you interact with them. And know that you are doing this not for them, you are doing it for you.

Finally, just a few practical thoughts about the job market.

But first, when you reunite with your classmates, and someone brings up this commencement talk which – let’s face it – they never will, they might say “I think the speaker had something to do with zombies…and he and his wife were building a bar in town at the former Murphy’s.” That’s it. I have now given you the hook by which to remember me. Zombies in a bar.

And when you go into an interview, an audition, or just a networking cup of coffee… always know in advance what your hook will be. What will set you apart from other candidates. Believe me, most interviewers have only a vague idea what to ask. Do not simply answer their questions and leave. Make a plan with yourself… and say I will be sure they remember this about me.

Now, when you get that job – and you will – please keep in mind the following: the company is unlikely to figure out how to make your job more interesting, more important, more gratifying. You have to do that for yourself. Make it a point to have lunch with people in other departments and ask them what they do. It’s amazing what people will tell you if you ask them. Also, ask them about themselves, because they will like you better.

And finally, as I tried to illustrate, don’t be afraid to jump around in your early career days. You simply spend too much of your life at work not to find something that energizes you.

So, as you go forward … keep that resiliency, keep your sense of humor, develop your hook….and find ways to work with people – listen, compromise, and make the world a slightly better place.