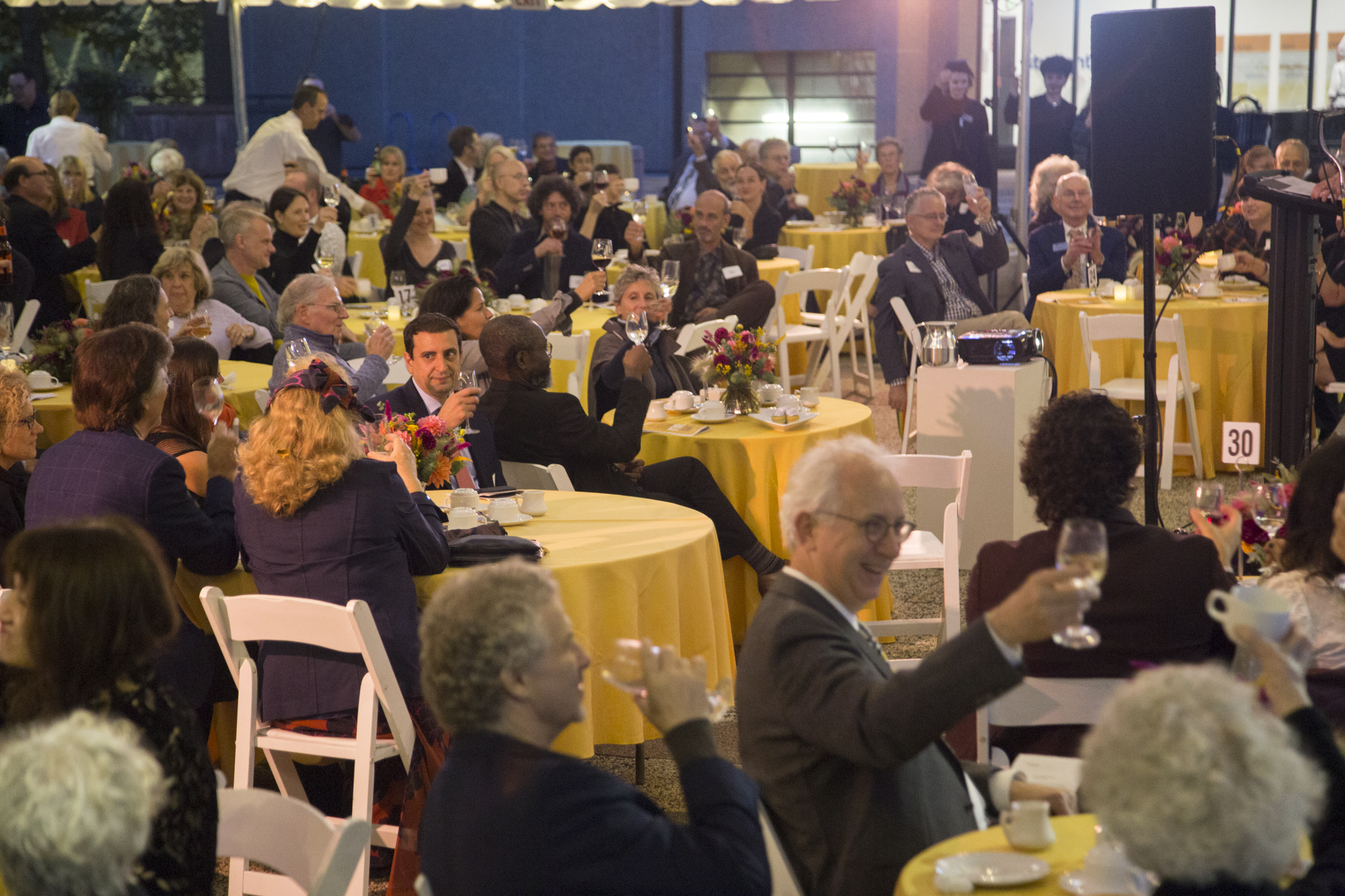 “For two decades, The Dorsky has created exceptional art exhibitions and programs to enrich and inspire SUNY New Paltz students and the Hudson Valley community,” said Anna Conlan, the Neil C. Trager Director of the Dorsky Museum. “We are beyond grateful to our incredibly generous community of friends and champions, whose support of the museum means we can continue to serve our students and the diverse communities of our region. We truly couldn’t do it without them.”

Fall 2021 marks 20 years since The Dorsky opened its doors, thanks to a gift from founding philanthropist Samuel Dorsky. More than 150 artists, tastemakers, museum patrons and friends were in attendance to commemorate the landmark anniversary, including honorees Andrew Lyght, an artist who has been featured in multiple exhibitions including “Andrew Lyght: Full Circle,” and the co-founders of Chronogram Media, Amara Projansky and Jason Stern, both of whom attended SUNY New Paltz.

“Bringing our annual fundraiser home to The Dorsky to celebrate the Museum’s 20th Anniversary felt really special,” said Conlan. “For me, honoring Andrew Lyght and Amara Projansky and Jason Stern was a real highlight of the evening—we are so fortunate to be part of such a vibrant and creative community in the Hudson Valley!”

Guests were given exclusive access before and after the event to the exhibition “The Dorsky at 20: Reflections at a Milestone,” as well as the short film “People of the Dorsky,” which features artists, patrons, educators and program participants. 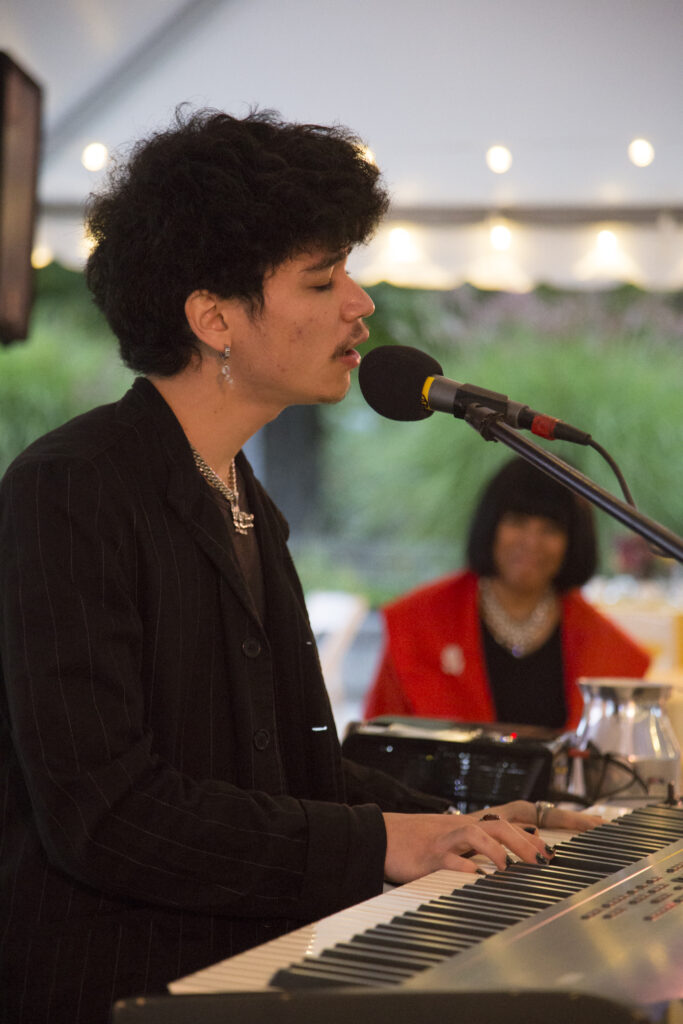 “None of this would have been possible without our community of students, artists, local partners, professors, campus colleagues, staff members, supporters, volunteers, and visitors,” said Anna Conlan. “We want to thank everyone for being part of our story; we look forward to the next 20 years together.”

About the Gala’s 2021 Special Honored Guests

Andrew Lyght lives and works in Kingston, New York, and has been a part of The Dorsky community since its 2016 major retrospective exhibition of his work. His art, which combines drawing, painting, sculpture and installation, is included in prestigious museum collections around the world including the Centre Georges Pompidou, Paris; the Jewish Museum, New York; the World Bank Art Program, Washington, D.C.; the Studio Museum in Harlem, New York; and the Smith College Museum of Art, Northampton, Massachusetts. Through matching industrial elements with vibrant colors and smooth geometric shapes, Lyght transforms hard-edge, functional construction objects into artworks that are graceful and lyrical. The Dorsky Museum is honored to celebrate Lyght as an innovative and important artist of our region.

Amara Projansky and Jason Stern are co-founders of Chronogram Media. They started the company and launched the flagship magazine in 1993, with the aim of nourishing and stimulating the creative and economic well-being of the Hudson Valley. Since then, Amara and Jason have led the launch of numerous magazines, websites, and custom publications and were founding members of An Institute for the Discovery and Fulfillment of Human Potential, Inc. Amara now leads Chronogram as CEO and Jason is board president and emeritus publisher. They both attended SUNY New Paltz and live in New Paltz, New York, where they grew up, with their two teenage children. Their contributions since starting Chronogram magazine have defined the Hudson Valley as a center of culture and creativity, and we are proud to celebrate them as cultural leaders in our community.

The Dorsky Museum creates art experiences that spark curiosity, critical thinking, and delight, connecting and serving the College and the diverse communities of our region. The Dorsky is a hub for the art and artists of the Hudson Valley-free, open, and accessible to all.

The Dorsky Museum’s permanent collection comprises more than 6,000 works of art from around the world and spans over a 4,000 year time period. While encyclopedic in nature, areas of focus include American art, with an emphasis on the Hudson Valley and Catskill Mountain region, 19th-century American prints, photography and contemporary metals. The museum also has a strong World Collection that includes outstanding examples of both two and three-dimensional objects from diverse cultures, dating from classical to modern times.

The museum’s temporary exhibition program has been hailed as one of the best in the region and features exhibitions, installations, and projects by internationally recognized artists as well as annual thematic exhibitions of work by regional artists. “The Hudson Valley Masters Series” is one of the unique exhibitions that the museum periodically hosts which focuses specifically on a body of work by an internationally acclaimed artist who resides in the area.