The following announcement was shared by email with faculty and staff on July 14. 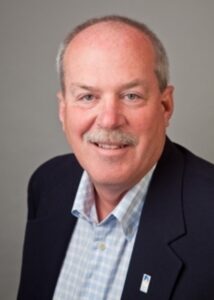 John began his career at New Paltz in April 1998 and has been instrumental in transforming the campus’s physical appearance over the past two decades. John was first hired as Director of Facilities Operations and was in charge of building maintenance and operations. He was promoted to Assistant Vice President in 2004.

As director of operations, John ran the single largest department on campus. With more than 200 staff members, John’s team was responsible for cleaning, maintaining and running heating, venting and air-conditioning for more than two million square feet of buildings; mowing 226 acres; plowing 2.5 miles of roads and 700,000+ square feet of surfaces and pathways; and maintaining more than 100 vehicles.

This extremely capable crew helped the campus navigate its share of crises. Many storms have ripped through campus, bringing snow, wind and water (who still has their “I survived Irene” t-shirt?) around and THROUGH our buildings.

The speedy actions of grounds, maintenance and custodial crews under John’s direction have saved the campus millions of dollars in repairs and avoided devastating shutdowns of operations. This same crew has been on the ground 24/7/365 since the beginning of the COVID-19 pandemic, ensuring that campus is safe and clean for our faculty, staff and students.

When promoted to Assistant VP, John added Facilities Design & Construction to his portfolio. This team is responsible for the upkeep and renovation of the 60 buildings on campus as well as the construction of new buildings. In 2013, John established the Office of Campus Sustainability. In 2016 he added a campus Energy Manager to the mix.

Throughout his career, John’s global vision for campus facilities has guided the president’s cabinet in making critical decisions on how best to utilize the capital funding received from the state to renovate dated spaces and create new spaces and/or buildings to meet student needs. John’s bold vision and faith in his talented staff led to the completion of the largest (at the time) “campus let” in 2010 when the iconic Atrium was created.

Additionally, New Paltz was the first of the SUNY campuses to endeavor a gut renovation of a residence hall in eight months – a practice so successful that we repeated it twice and modeled the practice for other campuses. This routine enabled the campus to save more than $1 million in room revenue each time, because the hall was only offline for one semester, opposed to the full year that these projects typically required.

During John’s tenure, the campus has undertaken several masterplan exercises. The first fulsome facilities landscape masterplan was created in 2008 and recently updated. This plan contributed greatly to the campus efforts to become more pedestrian friendly, moving parking to the periphery of campus, thereby eliminating much of the vehicle/pedestrian conflicts and making campus a safer (and more beautiful) place to walk. The campus-wide energy masterplan was created in 2015. The energy masterplan led to many energy saving upgrades such as the transition to LED lights throughout campus. The Design and Construction team has recently partnered with Information Technology Services to develop a comprehensive IT masterplan. All of these longitudinal studies assist the campus leadership in making long-range plans and enable us to shape the campus of the future. Each of these masterplan activities were carefully executed and John insured that the voices of faculty, staff and students were heard.

Over the course of the past two decades, countless projects have been completed under John’s leadership. These projects totaled more than $750 million. Click here for a list of some of the most notable projects.

In addition to his day job, John contributed to the richness of the campus community in many other ways. John was the president’s representative on academic senate and was an active member on the emergency response team. He volunteered as Assistant Women’s Softball Coach for four years and for three of those four years, saw the team through to the SUNYAC tournament. For more than a decade, he was a member of the committee for the Doug Sheppard Classic Golf Tournament, aka “The Shep”.” Through this work, he personally secured tens of thousands of dollars in donations to support student scholarships.

John has not only been a leader on the New Paltz campus, but throughout the SUNY System and Hudson Valley Region. He is respected by his peers, admired by his staff, and loved by us all.

Please join me in congratulating John on 23 years of dedicated, transformative and wonderful work, and wish him well as he heads to the beach with his lovely wife, Jeannette, and his daughter, Annie.