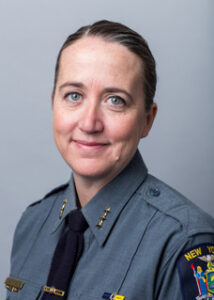 Chief of the University Police Department (UPD), Mary Ritayik, has announced that she is leaving New Paltz after a 21-year tenure to become Commissioner of the New York State University Police, effective July 6, 2021.

Ritayik joined the College in 2000 and served as officer, investigator, deputy chief and interim chief before being appointed chief in 2019. She has left a tremendous legacy of success and will be remembered as a knowledgeable, fair and engaging leader.

Under her leadership, UPD has adjusted protocols to better serve students in mental health-related crises and has taken several actions toward the College’s commitment to anti-racism as well.

In August 2020, UPD stated its commitment to become an anti-racist law-enforcement organization. Early steps in this process include UPD’s commitment to transparency; implicit bias and de-escalation training; review of policies and procedures to ensure they support an anti-racist culture; and ensuring that all officers are held accountable to these values.

Ritayik also took the lead in the establishment of the College’s new University Police Department Advisory Committee: A group of students, faculty, staff and alumni created to respond to amplified concerns about police reform and police interactions with Black people and other marginalized groups.

Read more about Ritayik’s contributions to the College at this link.