Ben is an eight-year-old survivor of a life-threatening liver disease. His dream is to be an aquarium owner when he grows up. His favorite fish, an opal white betta, is also named Ben.

A small team of New Paltz student filmmakers earned a prestigious Award of Excellence at the Broadcast Education Association International Festival of Media Arts for their short-form documentary, “Ben (Not the Fish).” 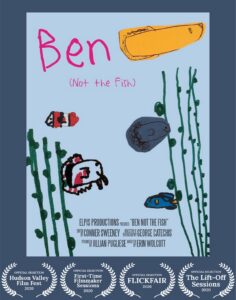 Digital Media & Production alumni Erin Wolcott ’20, Conner Sweeney ’20, George Catechis ’20 & Jillian Pugliese ’20 produced the film as a capstone to their Digital Filmmaking Seminar. The film focuses on Ben, and uses his story to showcase a YMCA program dedicated to lifting the emotional and financial burdens of families whose children deal with life-threatening illness.

“It was a turbulent semester, as students had to quickly transition to an online format,” said Gregory Bray, associate professor and interim chair of digital media & journalism. “Despite these challenges, these students created meaningful and compelling work, and it’s such a joy seeing their work earn recognition from such a prestigious international organization.”

The Broadcast Education Association (BEA) is a leader in telecommunications and electronic media, and their annual Festival is a celebration of audio and video production in a variety of genres, by students and faculty from institutions around the globe.

Prior to earning BEA honors, “Ben (Not the Fish)” premiered at the 2020 Hudson Valley Film Fest and was an official selection at the First-Time Filmmaker Sessions, the Lift-Off Sessions and FLICKFAIR, the on-demand film festival.