When Nikki Donohue ’21 (Journalism; History), then WFNP’s news director, heard that the College would be moving to remote operations in March 2020, her first thought was whether the student-run campus radio station would still be able to broadcast the news.

“I was texting in the group chat, asking if anyone was available to read on the air,” Donohue said. “We ended up being able to get a few people together. That turned out to be our last newscast from campus that spring.”

In the early days of the pandemic, WFNP was up against the same challenge many other teams were facing: learning to collaborate without being together in the same spaces.

“I thought there was no way this was going to run without people in the studio,” Donohue said.

Overcoming that challenge meant coming up with new ways of working and new ways of reaching audiences who were increasingly in need of human connection. 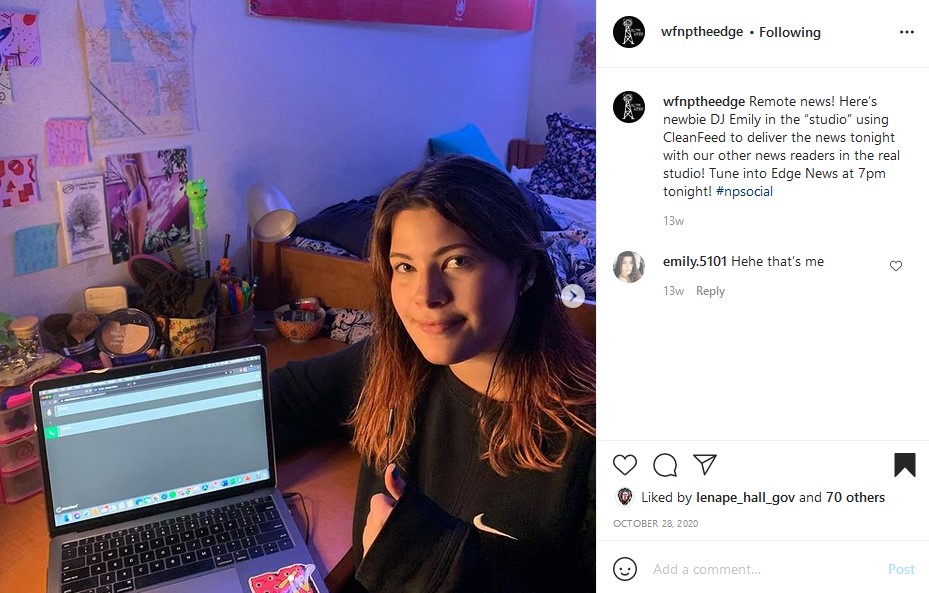 “During the summer we had an off period, which gave us time to plan,” said Donohue, who took over as station manager after the spring 2020 semester. “We wanted to respect people’s time and their own adjustments, but we also wanted to get stuff done.”

It started with organizing a remote recording system. Emily Nagle ’22 (Digital Media Production) became the station’s first-ever virtual programming manager, tasked with building a process that would let DJs create shows, transfer playlists and collaborate with engineers from anywhere in the world.

“Whether they’re in town, in their rooms on campus or someplace completely different, we wanted to make sure people had everything they needed,” Nagle said. “It takes a lot of coordination between people who can’t be together.”

The station also adopted new health and safety protocols to allow a small number of on-campus DJs and engineers to use the studio. They instituted strict occupancy limits, expanded cleaning practices and mandated use of microphone windscreens, among other practices.

The hard work paid off. WFNP was on the air continuously during the fall 2020 semester, helping preserve some semblance of normalcy for their listeners and for the students working at the station.

“The radio’s kind of an escape from all the crazy stuff that’s going on in the world,” Donohue said. “It just seems normal, when nothing else really does.” 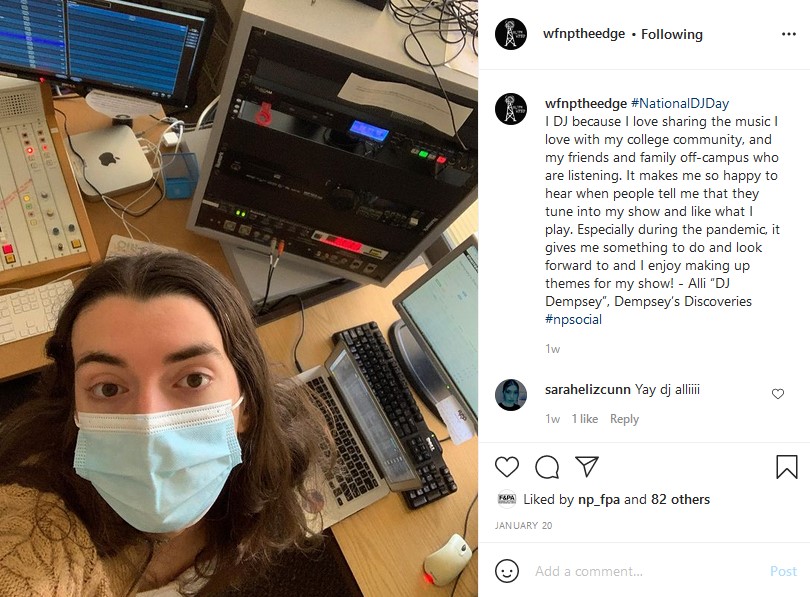 It may be people’s need for an escape while socially distant, or just the high quality of the shows, but WFNP’s listenership was outstanding during the fall semester. Like other technologies that have thrived during the pandemic, radio can deliver human connection, humor, personality and good music – all you need is an internet connection and some speakers.

“We’re promoting the live stream on our website more and more,” said Alli Dempsey ’22 (Journalism), the station’s promotions manager. “It’s making the station more accessible – I have friends and family who aren’t in the area who listen more now than they ever did.”

Even Center for Student Media Director Val Turco ’05 (Communication and Media) ’10g (Humanistic Multicultural Education), with her years of experience in media and broadcasting, has been surprised by how well WFNP has fared in the COVID-19 era.

“The students saw this as an opportunity for the station to connect to our local community and beyond,” Turco said, “and their hard work put us in a really cool spot to provide information and comfort on a platform that will hopefully continue to grow.”

WFNP is back on the air for the spring 2021 semester starting Feb. 1. For more information on how to listen and how to get involved with the station, visit https://wfnp.org/ or follow on Instagram @wfnptheedge.