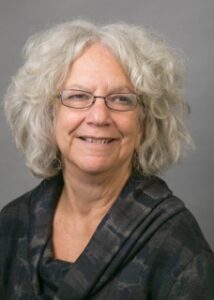 “Professor Schmidt has been such a vital presence in virtually every aspect of the English Department’s curriculum, from creative writing and composition to Holocaust literature and memoir, that it is hard to imagine the department without her,” said Laura Barrett, dean of the College of Liberal Arts & Sciences. “I will miss her enthusiasm for and dedication to her courses, students and scholarship, all of which made her an inspiring teacher, writer and colleague.”

Schmidt’s time at the College began in 1985 as the first Coordinator of the Composition Program. With the English Department’s Composition Committee, she developed the curriculum for Composition I and II, created a Teaching Assistant Training Program, developed courses in writing theory and worked with a group of faculty across the disciplines to create the Writing Board and the Writing-Intensive Program.

After 20 years in this role, Schmidt returned to teaching and served as the Creative Writing Director and Deputy Chair of the English Department. She was promoted to Distinguished Teaching Professor in 2005.

“A major highlight of my career has been my ongoing enriching work with SUNY New Paltz students at every level from first-year writing, to the Honors classes I’ve taught with Dr. Heather Hewett (The Literature of Witness), to undergraduate and graduate English classes in both literature and creative writing,” said Schmidt. “I feel very lucky to have had wonderful students and to have worked with colleagues in the English Department who have definitely enriched my life.”

For Schmidt’s former student Red Washburn ’05 (English) her impact as an educator has been equally as significant and long-lasting.

“As a professor, she creates a congenial environment of motivated learners who respect and respond to her as well as others with intellectual and emotional passion, an arduous task only a truly devoted professor, scholar and mentor could execute so deftly,” said Washburn. “Jan has been and continues to be a nurturing mentor and friend. We have kept in touch for almost two decades, and meet a few times a year to catch up as well as swap reading, writing, and teaching ideas. She also was there for me when my mother died, providing supportive words over email during the pandemic. The texture of our relationship is sustained by attention to both intellectual, creative, and emotional needs. Professors like Jan do not come around often and cannot be produced at will. As evidenced by the influence she has had on my life thus far–as well as many other students’ lives–I see Jan as a gift to our intellectual and creative communities.”

Schmidt’s work has been published in many journals including The Alaska Quarterly Review, The Broadkill Review, The Cream City Review, Home Planet News, Kansas Quarterly,  Memoir (and), the Westchester Review, and Wind. She has had two volumes of poetry published by the Edwin Mellen Press (“We Speak in Tongues,” 1991; “She had this memory,” 2000) and two collections of autobiographical essays, “Women/Writing/Teaching” (SUNY Press, 1998) and “Wise Women: Reflections of Teachers at Mid-Life,” co-authored with Dr. Phyllis R. Freeman (Routledge, 2000).

In addition, Schmidt co-authored with Laurence Carr an anthology of women’s writing from the Hudson Valley: “A Slant of Light: Contemporary Women Writers of the Hudson Valley” (Codhill, 2013), which won the USA Best Book Award for Anthology. One chapbook, “The Earth Was Still,” was recently published by Finishing Line Press and another “Hieroglyphs of Father-Daughter Time” by Word Temple Press. “Legacies: Fiction, Poetry, Drama, Nonfiction,” a composition and literature textbook and anthology, co-authored with Lynne Crockett, published by Cengage is now in its fifth edition. Her full-length volume, “Foraging for Light” was published in September 2019 by Finishing Line Press.

She plans to retire in New Paltz and to work on several writing projects including a new volume of poetry and to continue doing research in Holocaust Studies.

“If I were to scribe all of Jan’s contributions to the English department it’d take an index and glossary to sort through all of which she’s done,” said current student Dakota Rose ’21 (Theatre Arts). “Personally, Jan is an educator who seeks out the best in her students. Having Jan during a semester where the world is always in question, she is always a grounding presence. I am beyond lucky and grateful to have been educated by such a wonderful human being.”