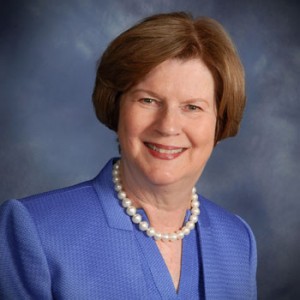 It is with sadness that the College shares the news of the death of Susan Najork ’67 ’70g (Elementary Education), a New Paltz alumna, Hudson Valley philanthropist and longtime member of the SUNY New Paltz Foundation Board of Directors, on Nov. 28.

Najork was a two-time New Paltz graduate with close family ties to the College – her father and brother were also alumni – who stayed closely engaged after graduating. Her dedication and service were recognized with the Alumni Association’s Heritage Award in 2017.

“Sue’s love of education and her kindness, care, and generosity were so apparent in her work on the SUNY New Paltz Foundation Board and her connection to her alma mater,” said President Donald P. Christian. “Her passing is a great loss to all.”

Najork was born on Aug. 5, 1945, and married her late loving husband, Fred Najork, in 1967. She worked as a teacher prior to the birth of her two sons, after which she was a devoted mother, wife, and community volunteer. She founded Collection Bureau Hudson Valley, a medical and debt collection company, in 1974, and owned and directed the company for many years.

In addition to her service on the Foundation Board of Directors, Najork also served as president of the boards of Newburgh Day Nursery and St. Luke’s Cornwall Hospital, and as a member of the boards of the Powelton Club, Calvary Presbyterian Church, Mount Saint Mary College, Hospice of Orange & Sullivan Counties, and the Community Foundation of Orange & Sullivan Counties.

Najork is survived by her sons, Eric and Kurt, and their families, as well as her brother, Ron, sister, JoAnne, her loving companion, Bobby Lee Huff, and many more extended family members and friends.

All services will be private and held at the Najork family mausoleum at Cedar Hill Cemetery in Newburgh. Plans for a celebration of Sue’s life will be announced at a later date.

In lieu of flowers, memorial donations may be made in Sue’s name to Montefiore St. Luke’s Cornwall Hospital Foundation.

Arrangements are under the care of White, Venuto and Morrill Funeral and Cremation Service, 188 N. Plank Road, Newburgh, New York.