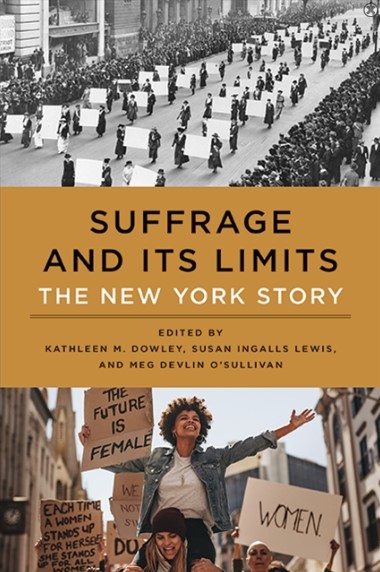 A newly published collection of essays, edited and partially written by a collective of SUNY New Paltz faculty members, provides a unique, interdisciplinary overview of women’s right to vote in our state.

It is bookended by a preface from New York Lieutenant Governor Kathy Hochul and a final chapter by activist Barbara Smith, and features a chapter on women in local politics by kt Tobin, director of the Benjamin Center for Public Policy Initiatives at SUNY New Paltz and deputy mayor of the Village of New Paltz. Dowley, O’Sullivan and Lewis also all contribute chapters.

“Suffrage and Its Limits” reflects on the legacy of suffrage in New York State, uses that history to understand present-day issues related to women’s social and political rights, and proposes ideas for future progress. Many of its themes can be traced back to an April 2017 conference celebrating the centennial of women winning suffrage in New York State, which was co-hosted by the Benjamin Center and the FDR Presidential Library and Museum, and held in part on the New Paltz campus.

“The book, and the conference from which it derived, sought to move beyond ‘celebrating’ to commemorating and complicating the history and legacy of women’s suffrage in New York State,” Dowley said. “This meant taking seriously women’s mobilization and political achievements while simultaneously acknowledging uncomfortable truths about some of these movements and their leaders, including their nativism, classism and racism. As a result, ‘Suffrage and Its Limits’ takes a clear look at past and present struggles for justice and imagines a limitless future.”

The new book represents the voices of scholars, activists and politicians with diverse areas of specialization, who together draw meaning from the past, present and future of women in politics in ways that are all the more timely in 2020, a presidential election year and the 100th anniversary of nationwide suffrage.

The first few chapters focus on the early suffrage movement in New York and how it ultimately achieved its goal; a middle section explores the state of women and politics in New York today; and a concluding segment explores the limits of liberal feminism and its unfinished agenda for women’s equality in New York.

“This is a strong contribution to the field and serves as a snapshot of several different ways scholars study the lives of women: in a historical context, through political science, through the lens of black feminist studies, and also personal experiences,” said Jennifer A. Lemak, chief curator of history at the New York State Museum.

More information about “Suffrage and Its Limits: The New York Story,” including chapter titles and purchasing options, is available online from SUNY Press.