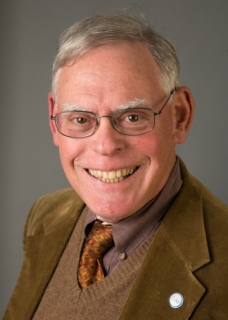 SUNY New Paltz announced today that Dr. Gerald Benjamin, associate vice president for regional engagement and director of the Benjamin Center for Public Policy Initiatives at SUNY New Paltz, has announced his intention to enter a phased retirement after a distinguished, 50-plus year career at the College. His retirement will take effect on June 30, 2020.

Effective Feb. 14, Jerry will step down as director of the Benjamin Center. During spring 2020 he will support the Center’s transition to new leadership, complete several center projects and teach a course in state government. In retirement, Jerry will be affiliated with the Center as a researcher and be available to teach courses periodically.

“Dr. Gerald Benjamin is the foremost scholar and expert on local and state government in New York and is held in high esteem by his faculty and administrative colleagues, state and local government officials, other scholars, and thousands of students who have taken his courses,” said President Donald P. Christian. “He has contributed greatly to the campus community, the region and the state during his longstanding career at SUNY New Paltz.”

Dr. kt Tobin ’92 (Sociology), associate director of the Benjamin Center, will succeed Benjamin to become the Center’s director. Tobin is currently responsible for designing, managing and producing center projects focused on regional issues and concerns. She is a 1992 graduate of the College, and holds a bachelor’s degree in sociology, a master’s degree in social research from CUNY Hunter and a Ph.D. in sociology from SUNY Albany. She is an affiliated lecturer in sociology and teaches an array of courses, including Introduction to Sociology, Social Inequality in the United States, Research Methods and Women in Politics.

Benjamin joined the New Paltz faculty as an assistant professor of political science in 1968 and was appointed to his current role in 2008. Originally founded as the Center for Regional Research, Education and Outreach (CRREO) by Benjamin and then-President Steven Poskanzer, the Benjamin Center is the principal locus of the College’s efforts engage with communities, governments, not-for-profits and businesses across the Hudson Valley. As the leading independent, university-based public-policy research center in the Hudson Valley, it conducts research on regional topics; encourages faculty to build regionally-based service activity into their scholarship and teaching; creates and directs institutes and programs to meet regional needs; and offers conferences and programs on matters of regional interest.

During the last 12 years, the Center has sponsored numerous conferences and events, and produced roughly 150 reports, studies, essays, book chapters and policy papers focused on key local, regional and statewide issues. Its work has also been widely cited in the media. Two books edited by New Paltz faculty colleagues – one already published, another forthcoming, both from SUNY Press – are based on center conference proceedings. An intergovernmental efficiency plan developed for Albany County in 2017 was recognized for excellence by the Ash Center for Democratic Governance and Efficiency of Harvard University’s Kennedy School. Collaborators in studies include the Regional Plan Association and SUNY’s Rockefeller Institute of Government. Project activities have been funded with more than $6 million raised from donors, foundations and national, state and local governments. Supervised by professional staff and supported by project funds and scholarships provided by donors, numerous student researchers from 16 academic departments have contributed to the Benjamin Center’s work.

Additionally at SUNY New Paltz, Jerry has also overseen the work of the Institute for Disaster Mental Health (IDMH), which will now report to the Provost, and The Legislative Gazette, which will report to the Department of Digital Media & Journalism.

Over the course of his tenure at the College, Jerry has taught a great range of American government courses, with particular focus on political processes and institutions in local and state government. In 2002, he achieved the University’s highest rank when he was appointed distinguished professor by the SUNY Board of Trustees. He has served as chair of the Department of Political Science & International Relations, presiding officer of the faculty and dean of the College of Liberal Arts & Sciences (1996-2008). Benjamin’s time as dean was a period of extensive renewal. Under his leadership, the College of Liberal Arts & Sciences strengthened its organizational and financial foundations, and added or revitalized numerous major and minor programs, including the interdisciplinary major in Asian Studies. The Liberal Arts & Sciences faculty grew in number and diversity while Benjamin was dean, and he demonstrated particular commitment to hiring more women and promoting more women to serve as department heads.

Formerly director of the Center for the New York State and Local Government Studies at SUNY’s Rockefeller Institute of Government in Albany (while on leave from New Paltz, 1993-1995), Benjamin served as research director of the temporary state commission on constitutional revision appointed by then-Governor Mario Cuomo. Prior to that he served as principal research advisor to a New York City Charter Revision Commission that achieved the most extensive structural changes in that city’s government in recent history. From 2004-2006, by unanimous bipartisan action of the Ulster County Legislature, Benjamin was appointed to chair the Ulster County Charter Commission. The Commission’s work resulted in approval at the polls of the county’s first charter. In 2007, Benjamin was appointed by then-Governor Eliot Spitzer to the State Commission on Local Government Efficiency and Competitiveness that in 2008 proposed wide-reaching reforms in local government in New York State.

Between 1981 and 1993, Benjamin was an elected member of the Ulster County Legislature. He served in legislative leadership as both majority leader (1985-1991) and chairman (1991-1993). Ulster County during this time had no elected executive; the legislative chairman was therefore the county’s chief elected officer. During Benjamin’s tenure as chairman, Ulster County had a budget of $165 million and more than 1,300 employees.

Benjamin served in the United States Army between 1970 and 1972, rising to the rank of captain in the Medical Service Corps. He has been a Fulbright lecturer at the University of Tokyo and the Japanese Foreign Ministry School, a Serbelloni fellow in residence at the Rockefeller Foundation Study Center in Bellagio, Italy, and a visiting professor at Meiji University in Tokyo, Japan.

He was a 1991 recipient of the New York State/United University Professors Excellence Award. Alone or with others, he has written or edited 15 books or monographs and numerous government reports, articles and opinion essays. His book with Richard Nathan, “Regionalism and Realism,” published by the Brookings Institution Press in 2001, was named an outstanding academic title by Choice magazine. Benjamin served as editor of the “Oxford Handbook of New York State Government and Politics,” published in 2012.

Benjamin earned a B.A. with distinction from St. Lawrence University, and a master’s degree (1967) and Ph.D. (1970), both in political science, from Columbia University.