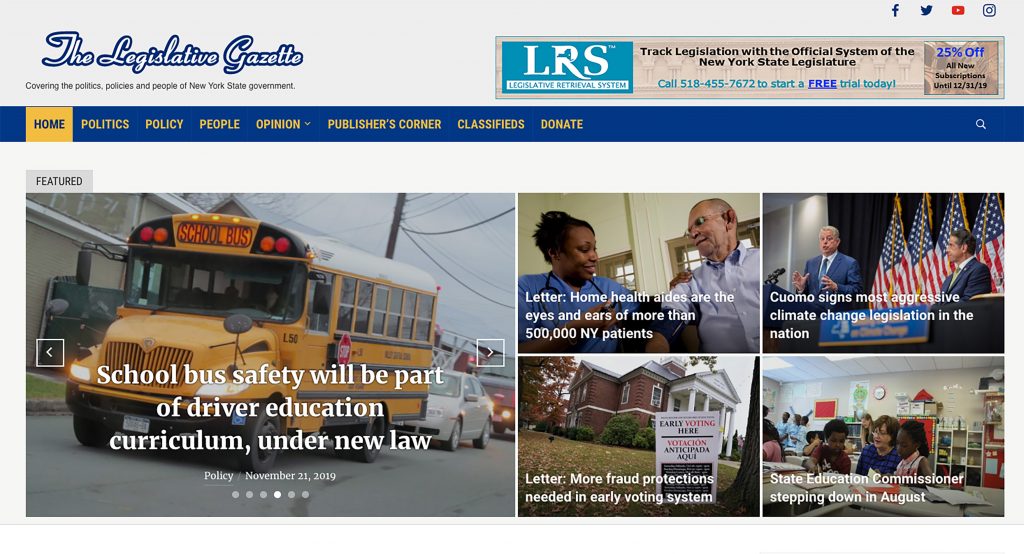 Investments by Knight Foundation and the Nicholas B. Ottaway Foundation
will enhance work of reporting internship program

The Legislative Gazette at SUNY New Paltz has been awarded two major investments in its premier public affairs reporting internship program by the John S. and James L. Knight Foundation and the Nicholas B. Ottaway Foundation. The publication will use the new philanthropic support to modernize its Albany newsroom and train students in the technologies used by professional journalists, allowing them to enter the field confident and prepared.

The Gazette will receive a $120,000 investment from Knight Foundation to support scholarships and travel, making the internship more accessible to students. Knight Foundation’s investment will additionally support the work of a webmaster, creating an enhanced online experience for users. The publication was also awarded a $15,000 grant from the Nicholas B. Ottaway Foundation (NBO) to support the acquisition of state-of-the-art equipment necessary to meet the evolving needs of modern journalism.

“At a time when rigorous, objective fact-based political reporting is under assault in the United States, and around the world, we are grateful for the recognition from Knight Foundation and the NBO Foundation. The Gazette has a 40-year record of achievement in preparing some of our best and brightest students for award-winning careers as professional journalists,” said Gerald Benjamin, director of the Benjamin Center for Public Policy at SUNY New Paltz and distinguished professor. “This financial support will further the renewal and re-invigoration of the program in the new media environment.”

This Albany news service provides comprehensive coverage of the New York State Legislature and other key policy makers in Albany. Published 10 months a year, this website covers the leading stories originating in the state capitol, and state news not found in other publications.

“We’re honored and proud to receive this recognition from Knight Foundation, that seeks projects in the arts, cities and journalism that lead to transformational, sustainable change,” said Erica Marks, vice president for development & alumni relations and executive director of the SUNY New Paltz Foundation. “We are deeply grateful, as well, for the continued commitment of James H. Ottaway Jr. ’18 HON to the Gazette program.”

In 2000, Ottaway and his wife Mary ’70g (Elementary Education), a New Paltz alumna, established the College’s first and only endowed professorship in journalism, named in honor of Ottaway’s father. Journalist, newspaper executive, philanthropist and longtime friend of the College, Ottaway was awarded an honorary doctorate of humane letters degree from the College in May 2018.

“SUNY New Paltz should be proud of its unique Albany Legislative Gazette, for its real world training of journalism students and for its reporting of many legislative and executive department actions which are not reported by any other news services, with shrinking Albany staff,” said James H. Ottaway Jr. “The Gazette is a vital public service.”

SUNY New Paltz alumnus James Gormley ’97 (Journalism), who serves as associate publisher and editor of The Legislative Gazette, noted that the “generous grants will give many more students the ability to report directly from the halls of the State Capitol, alongside professionals, learning the art of public affairs journalism through a truly hands-on experience.” He added, “We are very grateful that the Nicholas B. Ottaway Foundation and Knight Foundation recognize the value of this unique program and believe in our mission of training the next generation of public affairs reporters.”

About the Legislative Gazette
The Legislative Gazette is a nonprofit, nonpartisan news organization with a mission of keeping New Yorkers informed about the politics, policy, and people of New York State government. The newspaper is published as an educational project under the auspices of the Digital Media and Journalism Department at the State University of New York at New Paltz.

About the Nicholas B. Ottaway Foundation
The Nicholas B. Ottaway Foundation (NBO) is committed to improving communities and impacting lives through unique philanthropic committees; Education, Journalism, and the Community Impact Fund. The objectives of the Journalism Committee are to make contributions to journalism programs or projects which improve the quality of journalism in all of its forms, and to defend freedom of the press anywhere in the world.