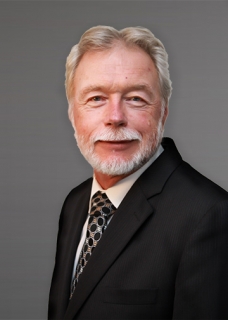 David Eaton, vice president for enrollment management at SUNY New Paltz, has announced his intention to retire at the end of June 2020. Eaton has served in his current role and as a member of the President’s Cabinet since 1998 and has made significant contributions to the Divisions of Student Affairs and Enrollment Management and to the campus during what will be a 39-year career at the College.

“I am grateful to David for his unwavering loyalty and commitment to SUNY New Paltz, our students and alumni,” said President Donald P. Christian. “He has provided exemplary leadership of the Enrollment Management Division, which includes 54 employees in the departments of Freshman Undergraduate Admissions, Transfer Admissions, Financial Aid, Records and Registration, Student Accounts and the Office of Veteran and Military Services.”

Eaton, who joined the New Paltz campus community in 1981, has been responsible for all aspects of the enrollment process from recruitment and enrollment to revenue collection and certification for degree conferral. He developed a marketing and public awareness campaign that has contributed to the growth in popularity and selectivity of New Paltz’s undergraduate programs. His direction of the College’s retention efforts since the late 1990s has resulted in increased student satisfaction with campus services and student retention and graduation rates – fueling the College’s upward trajectory.

During the past 29 years, Eaton was involved in the development of overseas programs and exchange agreements with universities and colleges in England, Ireland, Germany, Sweden, Greece, the Czech Republic and China. These programs have increased the number of study abroad opportunities available to New York residents and have increased the number and diversity of international students attending New Paltz.

At SUNY New Paltz, prior to his current position, Eaton served as the Director of Residence Life from 1981 to 1985, Dean of Students from 1985 to 1990, Associate Vice President of Student Affairs from 1990 to 1995 and Interim Dean of Admissions from 1995 to 1997. He held prior positions at Grand Valley State University in Allendale, Mich., Northern Michigan University in Marquette, Mich., and at Peru State College in Nebraska.

During his tenure at the College, Eaton has served as the chair of the College’s Brand Marketing Task Force since its inception in 2004. He also chaired the Alumni Strategic Planning Task Force that examined and made suggestions for improving alumni engagement in support of the College’ Strategic Plan. In addition, Eaton has been a member of the Middle States Accreditation Steering Committees in 1999-2001, 2009-2011, and 2018-20, the SUNY Board of Trustees Student Assembly Transition Committee from 1990 to 1991, and the Campus Auxiliary Services board of directors from 1983 to 1995 and again from 2006 to present. He also has been involved in major strategic planning committees at the College.

Eaton has served as an ambassador to the community through his longstanding leadership of the Ulster County Legislature’s Stop DWI Advisory Board, his service on the executive board of the Hudson River Maritime Museum, and his chairmanship of the board of the Senator Charles Cook Children’s Center on campus.

The College will conduct a national search for a new vice president during the 2019-20 academic year to fill this vital position on a permanent basis.