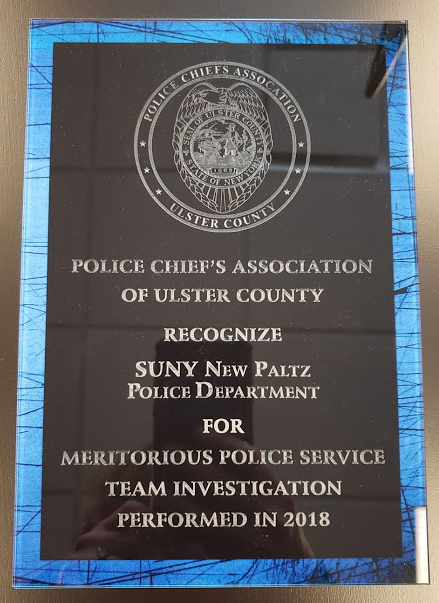 The SUNY New Paltz University Police Department’s (UPD) collaboration on a multi-agency investigation in May 2018 was recognized with a Meritorious Police Investigation award at the annual Police Chief’s Association of Ulster County Awards Dinner on May 8.

“I want to give kudos to all members involved in these events,” said UPD Chief Mary Ritayik. “You have demonstrated your commitment to keeping our community safe and your dedication to inter-agency collaboration.”

Officers from four departments – UPD, New Paltz Police Department, Ulster County Sheriff’s Office and New York State Police – were honored for their handling of events that began on May 30, 2018, and ended with arrests in two separate cases.

The first case began with a home invasion in New Paltz involving a firearm. UPD Investigator J. Carson worked closely with New Paltz Police and State Police officers in the hours following the break-in, and a suspect was identified and arrested later that day.

The investigation tied up many New Paltz Police Department units on the day of the village’s annual Memorial Day Parade. UPD joined the Ulster County Sheriff’s Office and New York State Police in stepping up to provide personnel for the parade detail to ensure a safe event.

Later that evening, in a separate incident, New York State Police began pursuit of a vehicle that failed to comply with an order to stop. The vehicle pulled off the Thruway at the New Paltz exit and was later found abandoned near New Paltz High School.

For the second time that day, UPD partnered with the other three agencies to investigate and apprehend the suspects. Officers conducted grid searches of the surrounding area and established perimeters on all roads exiting the town. UPD Lieutenant Greg Thompson was supervisor on duty.

A team including UPD Officer Tyler Pece eventually located two suspects in a suspicious vehicle. During the ensuing traffic stop, the driver was removed, but another suspect jumped into the driver’s seat and took off, in the process dragging a New Paltz Police Department officer a short distance.

The vehicle crashed soon after fleeing, and the three remaining occupants fled into the woods. They were arrested a few hours later after the cab they called was stopped at a road checkpoint. 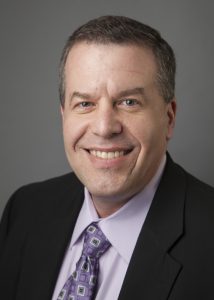 A 28-year police veteran and a 1985 SUNY New Paltz alumnus, Dugatkin joined the New Paltz Police Department in 1990 and rose to the rank of detective sergeant. He left the town police department in 2011 to assume the role of chief of University Police.

As UPD chief, Dugatkin started the first Community Emergency Response Team at the College and coordinated the first active shooter drill on campus. He also helped initiate a mass notification system for the college and implemented new programs to improve campus safety.

In addition to his 28 years in law enforcement, Dugatkin served for three decades with the New Paltz Rescue Squad.