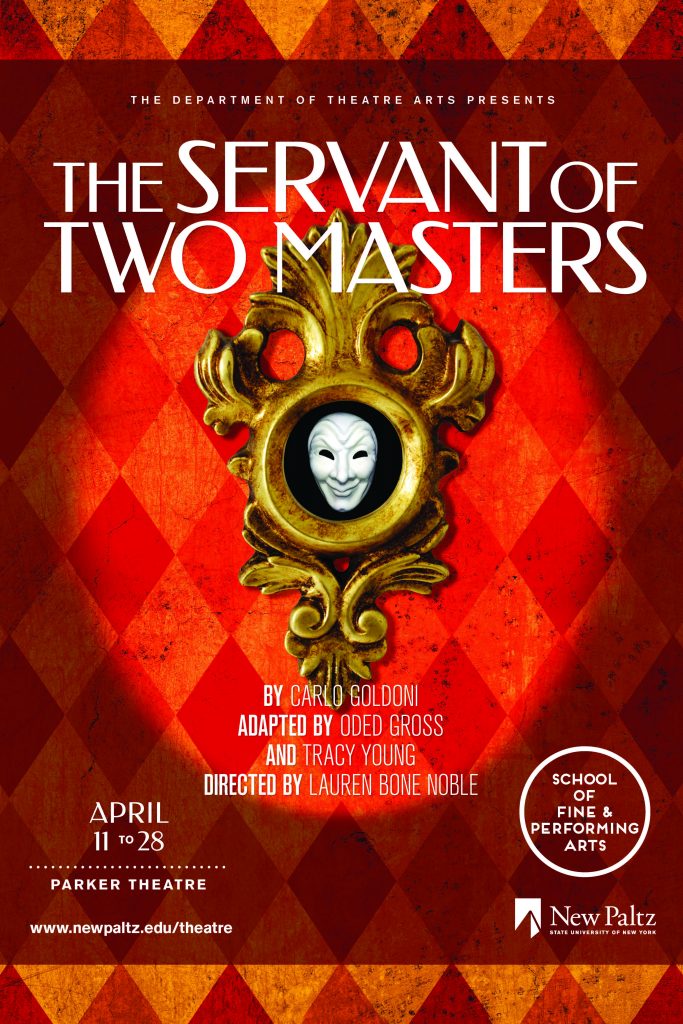 The Department of Theatre Arts at SUNY New Paltz presents “The Servant of Two Masters,” a modern adaptation of a commedia dell’arte classic about a troupe of wildly self-obsessed actors up against hard economic times.

This production is directed by Lauren Bone Noble, adjunct faculty of theatre arts, and is an adaptation by Oded Gross and Tracy Young of the original play written by Carlo Goldoni in 1746.

The theatrical company at the center of this hilarious tale is forced to resort to absurd measures to perform a play about star crossed lovers, old misers demanding their share, and struggling servants trying to keep it all together.

“This production is a play within a play,” said Bone Noble. “These layers of comedy serve to crank up the humor and send the imagined company of actors into hysterics as they endeavor to perform the play without a director and missing an actor.”

Bone Noble said audiences can expect an evening of “pure comedy,” and that she is excited to bring the high physical style of commedia dell’arte to the Parker Theatre stage.

“The modern actor and audience rarely get to experience this wonderful theatrical form,” said Bone Noble. “I am thrilled to introduce it to our student actors and present it to our audiences.

About the Director
Lauren Bone Noble is an artist and educator who lives on a small farm in the Mid-Hudson Valley. Bone Noble received her BFA from the University of Memphis and her MFA from the National Theatre Conservatory at the Denver Center Theatre Company. Bone Noble has worked previously with playwright Oded Gross, appearing as the servant Osif in his adaptation of “The Government Inspector” at the Franklin Stage Company. Most recently, Bone Noble premiered her original one-woman clown show, “FURY!”  She is the recipient of the 2017 Chancellor’s Award for Excellence in Adjunct Teaching.