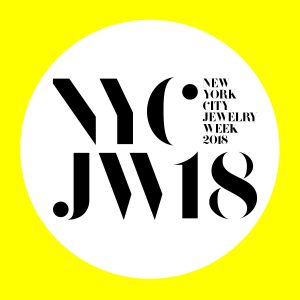 The event will offer exhibitions, lectures, workshops, tours and collaborations between some of New York’s most respected jewelry professionals and businesses.

“NYCJW is important because it will bring together the often disparate voices of the NYC jewelry communities, and will offer an opportunity for conversations between all types of jewelry,” said Jonathan Wahl ’94g (Metal), director of the Jewelry Center at the 92nd Street Y who sits on the NYCJW advisory board.

Wahl says his New Paltz education “was invaluable and prepared me to become the artist I am today. The use of craft as a medium for critical commentary shaped the way I think about jewelry and the decorative arts.”

Amelia Toelke ’05 (Metal) has a solo presentation at NYCJW called Gem Friends, which will include recent and current work created using gouache on paper as well as selections from her Gem Face series, which playfully pieces together jewelry to form expressive faces. Toelke will also participate in a group exhibition called #fail#success, which showcases social media as a tool in the creative process.

“I am excited that the Week brings together so many communities within jewelry, from fine jewelry to one-of-a-kind conceptual wearable artworks,” said Toelke. “I think this will create an unprecedented opportunity for conversation and dialogue. On a personal note, I am thrilled to show a diverse group of work that, while not wearable, continues to draw upon my early training in jewelry and metalsmithing.”

For more information and to RSVP to individual NYCJW events, visit www.nycjewelryweek.com.

Learn more about Metal at New Paltz via this link.