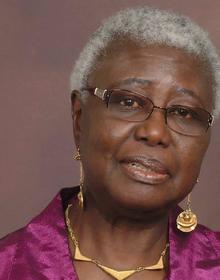 It is with sadness that the College shares the passing of Emerita Professor Eudora Ebitimi Kombo (formerly Eudora Chikwendu) on Sept. 16, 2018. She was 76.

Kombo was born in Nigeria, held a Ph.D. in Political Science and Government from the University of Nigeria, and lived in various locations in Nigeria, England and the United States during her lifetime. She was a resident of Roselle Park, NJ, at the time of her death.

Kombo joined the SUNY New Paltz faculty in 1986, and taught for more than two decades in the Department of Black Studies and the Department of Political Science & International Relations, as an expert in African politics.

Kombo additionally served as Affirmative Action Officer during her early years at the College, and she went on to play an important role in the establishment of the Women’s Studies Program, a precursor to the Department of Women’s, Gender & Sexuality Studies. She developed and taught the “Women, War and Peace” and “Gender and Development” courses that were core to the Women’s Studies Program curriculum.

Kombo remained involved in that field following her retirement in 2008, publishing a thesis titled “Women in national liberation wars in the settler colonies of Kenya and Zimbabwe: pathways to political empowerment” in 2012, and earning an M.A. in Women’s Studies from the University of York.

Kombo is survived by her children, Azuka and Meremu Chikwendu, and grandchildren, Vic and Jeremy Henry.

A funeral service will be held on Saturday, Sept. 29, 2018, at Trinity Episcopal Church in Cranford, NJ, with an open reception following the burial. More information is available from Mastapeter Funeral Homes.

In lieu of flowers, the family requests donations be made to Tostan, a nongovernmental organization with a mission to promote sustainable development, human rights and positive social transformation in African communities. More information at www.tostan.org.