In July 2018, the Institute for Disaster Mental Health (IDMH) at SUNY New Paltz led 29 SUNY students, including 14 New Paltz students, on a two-week deployment in Puerto Rico to rebuild homes near the capital city of San Juan. Use this link to read the article about the IDMH’s work in Puerto Rico.

We spoke with one of the students, IDMH Graduate Assistant Nathaniel Pickering ’18g (Mental Health Counseling), about the experience. The full text of that exchange, edited slightly for clarity, can be read below. 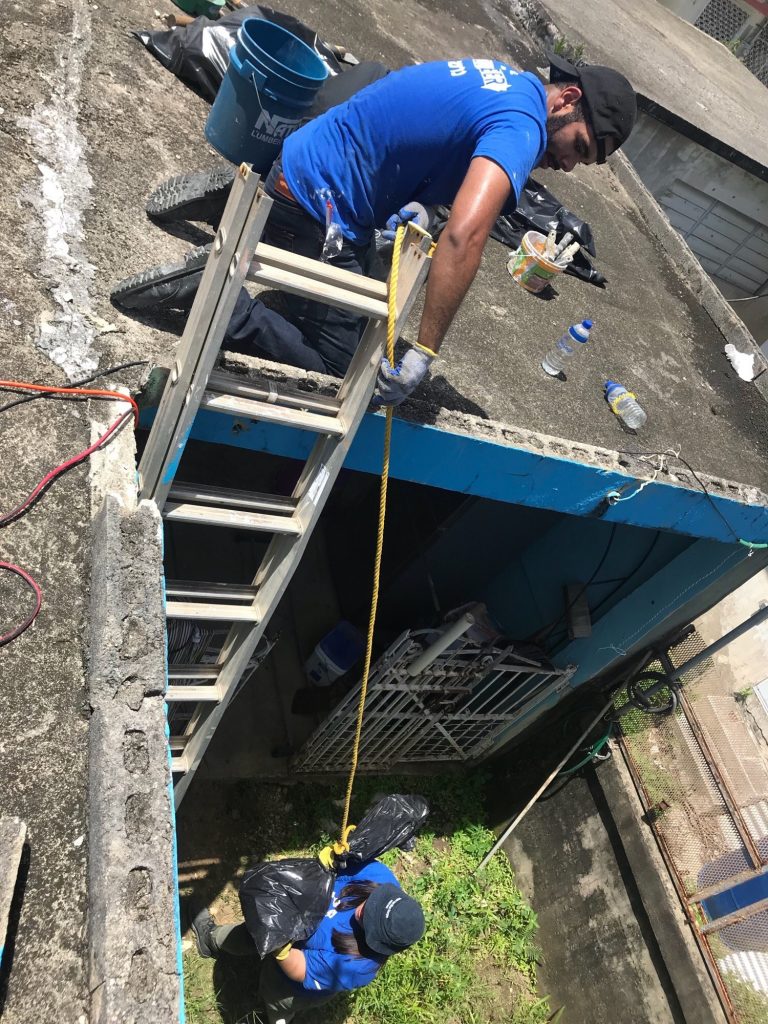 Why did you apply to participate in the Puerto Rican deployment?

I opted to go on this trip with the Director of the Institute for Disaster Mental Health, Amy Nitza, because the people of Puerto Rico are still in need. Having the opportunity to physically travel down to Puerto Rico for disaster recovery was something that I felt that I could not decline in good conscience.

It is hurricane season, it is nearly a year later, and there are people who still need help. While I wish I could help every last person who was impacted by the hurricanes last year, every little contribution to the effort that people put in matters. Ultimately, I wanted to help the people of Puerto Rico achieve some sense of peace and safety with living in completed homes.

How would you describe the situation on the ground where you are working?

There are many abandoned houses here. At times, neighborhoods seem like ghost towns. There are missing roofs on many of the houses. Countless houses are using blue tarps as make-shift roofs.

One house in particular that I am working on had the roof of the house entirely blown off. Birds began moving into the second floor of the house and making it their home. You can imagine the mess that these birds made. This homeowner even went to the hospital at one point because she was having trouble breathing due to the presence of the birds and all of their waste. I would think that many people here experience problems similar to this one.

During my facilitation of a group discussion among the students here for the academic portion of the trip, Peter Velz [assistant vice chancellor for external affairs, State University of New York] reminded us that we arrive here ourselves and see the current condition of the houses that people are living in, but it is important to remember that people have been living in these conditions since the storm hit. Months and months in houses without roofs, or houses with tarp-roofs. It just adds further perspective to the work that we are doing here and why it matters.

Is there something you’ve learned during this experience that you could not have learned in any of your classes?
In psychology or counseling classes discussing disasters, one way to measure the size of a disaster is to evaluate the duration of it. Duration can be viewed as either how long the actual disaster lasted, or it can be seen as how long the impacts of the disaster last.

While it is one thing to learn about this concept in the classroom, I do not believe that one can truly grasp this concept until they see how much damage remains to be repaired nearly a year after the hurricane has ended.

The hurricane is still happening for people currently living in houses which are still severely damaged. There are houses that leak every time it rains. There are houses with the second floor completely missing. There are people who are still afraid from the last storm. These are all experiences that a textbook cannot do justice.

What do you think you will remember most about your time in Puerto Rico?

I think one of the most unexpected things for me to experience was the happiness expressed by the homeowners while they allowed us to work on their homes. It seems to me that while the hurricane has broken their homes, their spirits are not broken. It seems that many of the homeowners still have hope that their homes and their island will recover. Their resilience inspires me to continue working as much as I possibly can.