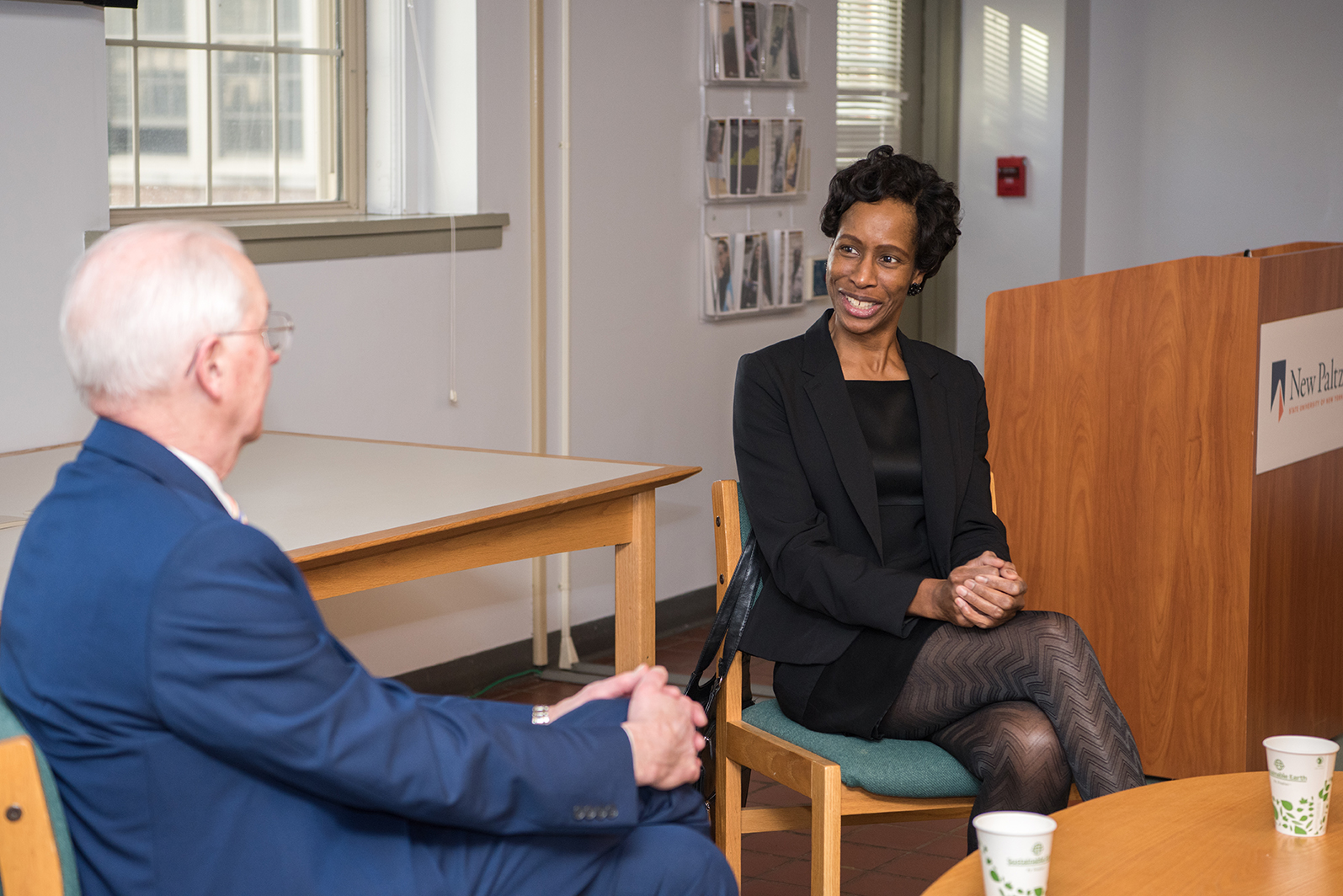 The Q & A is the first in a series of seminars, workshops and lectures Simmons will give during her time on campus this spring, culminating on April 19, with an address titled “Media in the age of bombings, beheadings, and blaming for fake news.”

In conversation with President Christian, Simmons offered a preview of her expertise and interests in journalism, sharing a number of fascinating anecdotes from a life that began as the child of Grenadian immigrants in London, and a career of reporting on location in Europe, Africa, North America, Russia and the Middle East.

The following are selected excerpts from Simmons’ conversation with President Christian and the audience at the April 10 Q & A.

On how new technologies have affected the media industry:

“Today, you can get news anywhere at any time, and there’s good and bad that result from that. The main impact on traditional media is that we have to compete now with everyone – everyone is a citizen journalist, and you can get everything instantly now so you have to be quick.

“Traditional news managers will say that we cannot sacrifice speed for accuracy, but that doesn’t always happen. We’re competing against this force, social media, which is spreading all this stuff, and we’ve got to be even more responsible about fact checking and having sources.

“But a good thing about it is that today the world is interconnected, and in many places that are so remote that in the past they couldn’t get information, now they can. So there are advantages of globalization for the media. In this age, information is so vital – information is survival.”

On the prevalence of “fake news,” and how journalists and readers can fight back:

“It’s really tough to combat fake news, because it’s so easy now to disseminate on the internet. But there are steps that can be taken, and for journalists it’s really a matter of ensuring that we still have good investigative units that can investigate stories and debunk ‘alternative facts.’

“I can say that the proliferation of fake news and attacks on the media have really inspired journalists, really given us extra energy. We’re on a mission to make sure we are honest as reporters, that we are giving you the facts.”

“Members of the public have a responsibility as well, doing our homework and not just taking everything we read as gospel. You can check the accuracy of a story by looking at whether it is citing data or just stating something, and by asking who’s putting it out there and whether there’s an underlying agenda or a bias that may not be seen in the story itself.”

On the challenges and rewards of international travel and reporting:

“There used to be a time when it was so much easier to get around as an international correspondent. Today it’s so different, because journalists have become targets. You can capture that person from the West, or use them as an example, even behead them, just to make a point.

“But there is no greater experience than being able to travel to any place in the world. One thing you learn is that people are people everywhere, and if you get to know them they’re just like everyone else. Most of us are. We like to take care of our children; we want them to get an education; we want to live well. Even in war zones, people get married, they go to school if they can, they bury their dead. The rituals of life continue.”

Hear more from Ann Simmons, the 2018 James H Ottaway Sr. Visiting Professor of Journalism, at her public lecture, “Media in the age of bombings, beheadings, and blaming for fake news,” on Thursday, April 19, at 7 p.m. in Lecture Center 102.

Additional information about the Ottaway Visiting Professorship and biographies of previous professors can be found at https://www.newpaltz.edu/ottaway/.