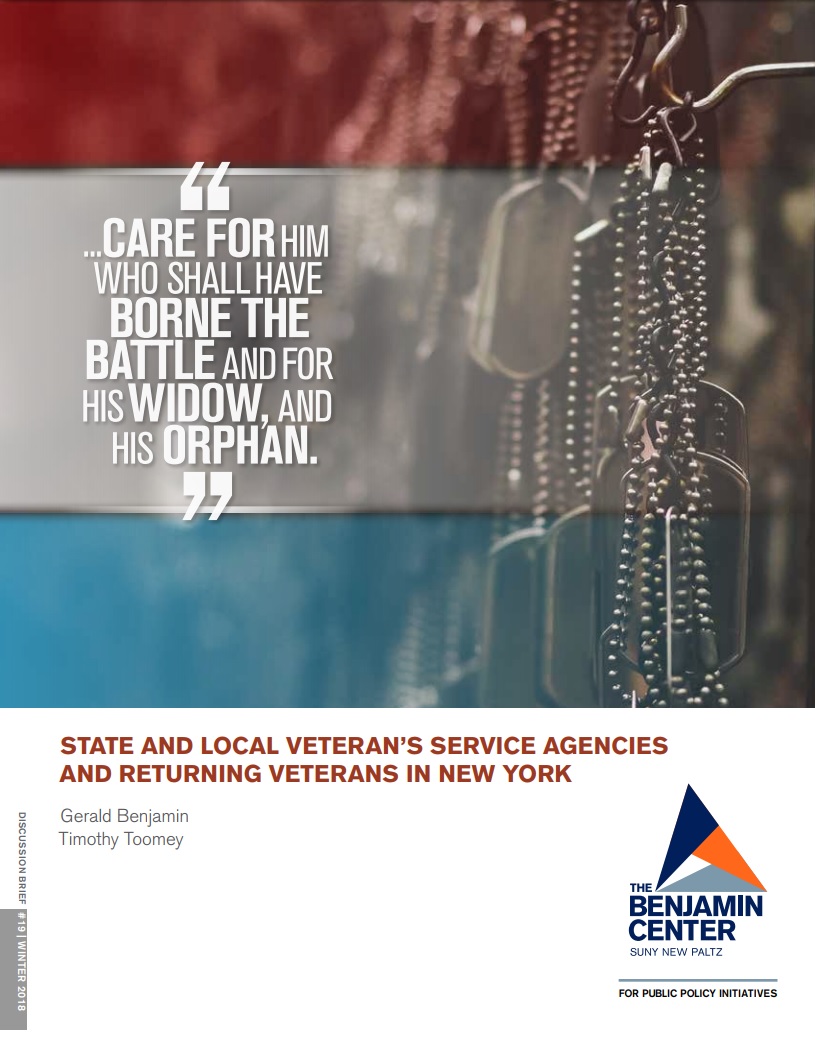 The brief looks at services offered to New York State veterans as they transition from active service to civilian life. The authors find a number of statutes and programs designed to assist returning veterans with employment, education, housing and other aspects of their lives, but also that the manner in which these services are delivered works against optimum performance. They argue that strengthening county veterans’ offices, while retaining state oversight, would improve coordination and efficiency in meeting the needs of New York’s veterans.

Returning veteran services vary from state to state, but in New York, state law requires that extensive efforts are made to support returning veterans. The brief cites a number of examples: preference for civil service jobs is guaranteed in the state constitution; state law requires that localities offer veterans partial exemption from property taxes; there are specially focused programs for veterans with service-related disabilities, and for those who have gotten caught up in the criminal justice system; and a recent priority has been to give added attention to the needs of increased numbers of women veterans.

But the New York State Division of Veteran Affairs is only one of multiple disparate institutions offering veterans services. Benjamin and Toomey navigate the many layers of available services, from national to state to county to local and private entities, and conclude that the desire to serve those who have served is genuine, but that New York can do better.

Their brief demonstrates that the current “collection of partly connected pieces” offers no standard procedures, practices or benchmarks. Needed technology, information and databases are not uniformly available. Efforts are sometimes coordinated among disparate agencies, sometimes not, and state and local departments often blame one another when things go wrong.

The state has increased resources devoted to veteran-oriented programs, but those used specifically to advise veterans at various stages in the transition from military to civilian life have declined significantly. Meanwhile, local offices often operate on minimal resources within established routines and relationships.

Benjamin and Toomey recommend that veterans’ services should be delivered fully through counties, as are most other social services in New York State. They provide a number of specific suggestions for how state government can direct this effort and equip the counties to succeed: by collaboratively establishing standard procedures and goals; aggressively acquiring and providing the information needed for effective outreach and service provision; maintaining centralized databases and applications to support county offices; acquiring and distributing uniform technology; providing regular training; and serving as a source of advice on best practices and programming gathered from a review of the work of state and local veterans’ service offices across the nation.

The full text of “State and Local Veteran’s Service Agencies and Returning Veterans in New York” can be accessed online by following this link: http://www.newpaltz.edu/media/the-benjamin-center/db19_vets.pdf. Contact the Benjamin Center at (845) 257-2901 to request a physical copy.