The Benjamin Center at SUNY New Paltz will host a talk on “Voting Behavior and Punitive Policies” by Ariel White, assistant professor of political science at the Massachusetts Institute of Technology, on Thursday, March 15, at 5 p.m. in Lecture Center 102.

White will discuss her research into two headline-generating trends that may at first glance seem unrelated: U.S. incarceration rates that are among the highest of any developed nation, and disaffection from government leading to low voter participation (including in New York State, which has one of the lowest voter turnout rates in the country).

White connects these two issues by investigating how potential voters are affected by experiences with punitive government policies, such as incarceration and immigration enforcement. Recognizing that “millions of people in the U.S. have direct [and indirect] experience with the machinery of immigration enforcement or criminal courts,” she asks: “What do these experiences mean for political behavior in the United States?”

She presents findings from studies of Latino voters impacted by deportation practices, African-Americans caught up in the criminal justice system at higher percentages than the overall populations, and families of the incarcerated. White cites this research as evidence that punitive government policies either deter voting or engender activism on the part of those impacted.

“Gary King is among the world’s leading applied social scientists,” said Benjamin Center Director Gerald Benjamin. “We are most grateful, and delighted, that he has chosen to provide a forum at his alma mater for students, faculty and regional community members to learn of the power of well-conceived and executed social science research to inform and direct policy that deeply affects our daily lives.”

“Voting Behavior and Punitive Policies” by Ariel White will be held on Thursday, March 15, at 5 p.m. in Lecture Center 102 on the New Paltz Campus. The event is free and open to the public. 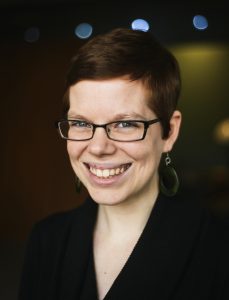 About Ariel White
Ariel White is an Assistant Professor of Political Science at MIT. She studies voting and voting rights, race, ethnicity, immigration policy and the criminal justice system. Her work uses large datasets to measure individual-level experiences, and to shed light on people’s everyday interactions with government.

She received her Ph.D. in government from Harvard University, where she was a doctoral fellow in the Multidisciplinary Program in Inequality and Social Policy (at Harvard’s Kennedy School) and a Radcliffe fellow. Her research has appeared in the American Political Science Review, and is forthcoming in Political Behavior and the Journal of Race, Ethnicity, and Politics.

About The Benjamin Center
The Benjamin Center for Public Policy Initiatives at SUNY New Paltz (formerly CRREO) was established in 2007 to further engage the College with communities, governments, not-for-profits and businesses across our region.