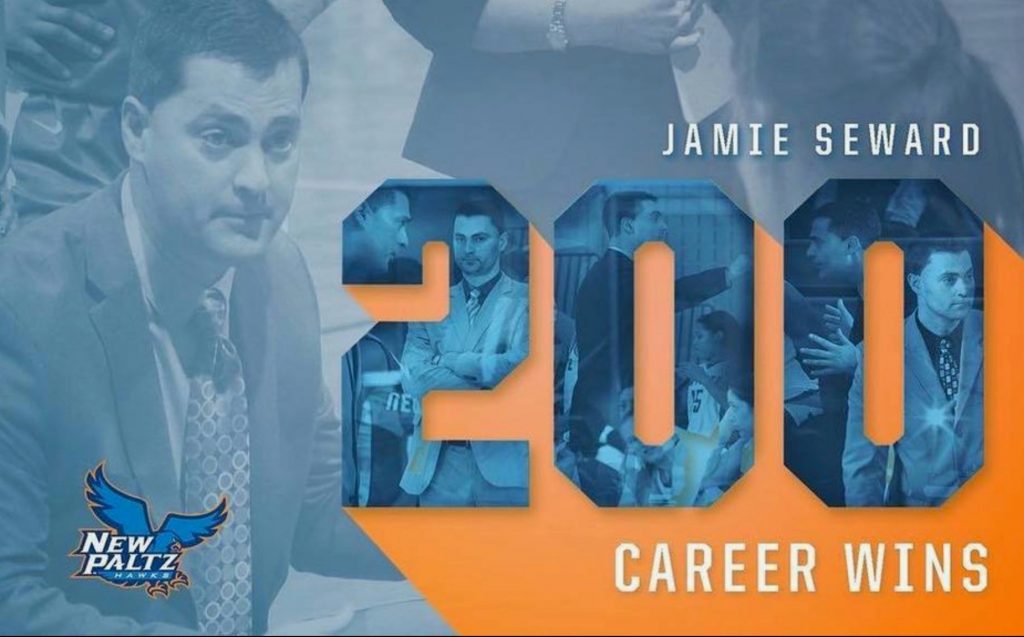 Jamie Seward assumed the role of SUNY New Paltz Women’s Basketball Coach in 2005 and has turned the team into a perennial SUNY Athletic Conference (SUNYAC) contender, with 11 out of 12 winning seasons.

Now coming off back-to-back SUNYAC championships and the team’s first ever appearance in the NCAA D3 Sweet 16 last year, the Hawks took a step toward another deep postseason run with divisional wins on Jan. 5 and Jan. 6, against Oswego and Cortland, respectively.

The two wins pushed the Hawks to 7-5 on the season, but also brought Seward, already the winningest coach in New Paltz women’s hoops history, his 200th career win.

The milestone achievement was all the more special because it came on a pivotal SUNYAC weekend, at home at the Hawk Center.

Seward has had only one losing season in his career, a 4-14 mark during the 2013-14 season. The freshmen on that team, Kit Small and Courtney Irby, became the core of the program for the next three years and brought the Hawks their most successful season’s to date, which includes two conference championships and an NCAA Sweet 16 appearance.

The Women’s Basketball team is preparing for a two game road trip before returning home for a weekend set Jan. 19 and 20 against Buffalo State and Fredonia. Check out their schedule and learn more about the team on nphawks.com.

The 2018 SUNYAC Women’s Basketball tournament begins on Feb. 20, with matchups TBD as of this writing.